Don't Leave Home without Them!

With a low vamp for nice toe decolletage!

Leave it to LizRetros to come up with new ways of keeping treasured dolls spoiled. For her new line of shoes now expands to fit a range of 1/6 fashion dolls. Perhaps, this long weekend is the time to take inventory and finally get shoes to replace missing ones or to give a beloved classic more glamour! From solid colors to powerful animal prints, the mouth-watering selection (all have red soles - a nod to monsieur Louboutin) is sure to make decisions difficult! 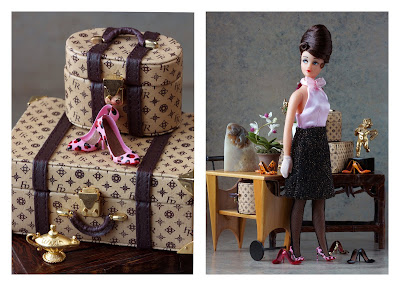 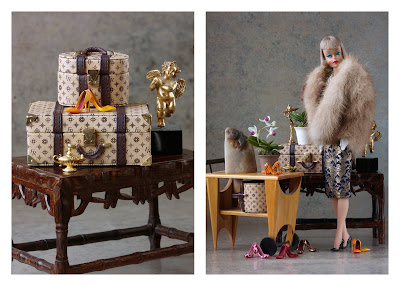 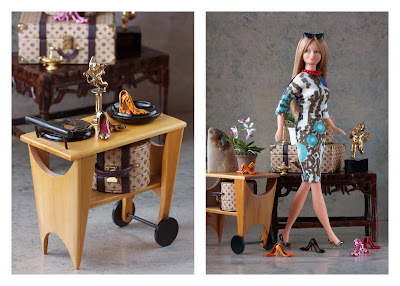 Mamzelle de Paris' Sophine has fun in a sheath by LizRetros and golden leopard heels. Necklace by Joy Jarred.

Posted by Ernesto at 1:08 PM No comments:

Dolldom's editors recently discovered this never published Photoplay story featuring Gene Marshall and her pal Violet Waters modeling shoes for an upcoming film. The beautiful pumps, manufactured by LizRetros (who also designed the wardrobe) as an exclusive for Monolithic Studios, featured a low vamp and a virtuoso stiletto heel. Both actresses enjoyed modeling and taking home a pair! 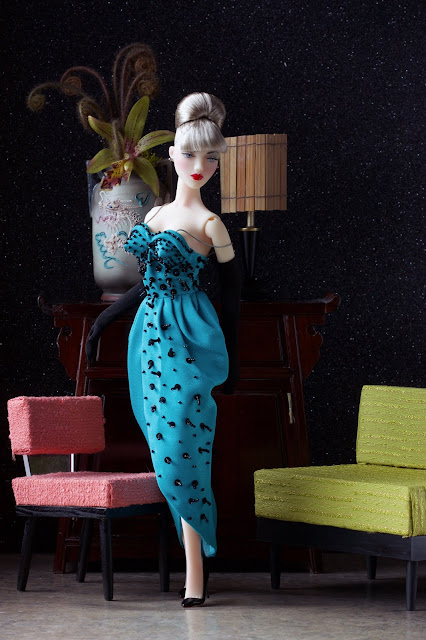 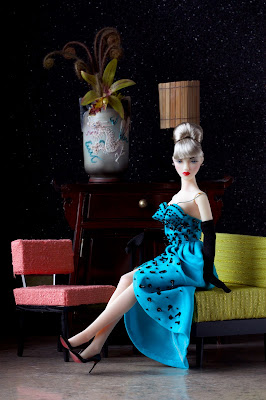 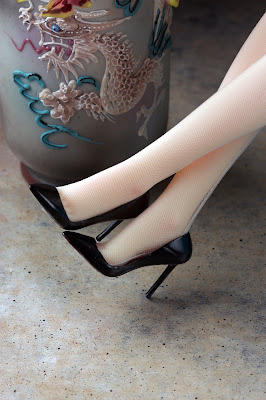 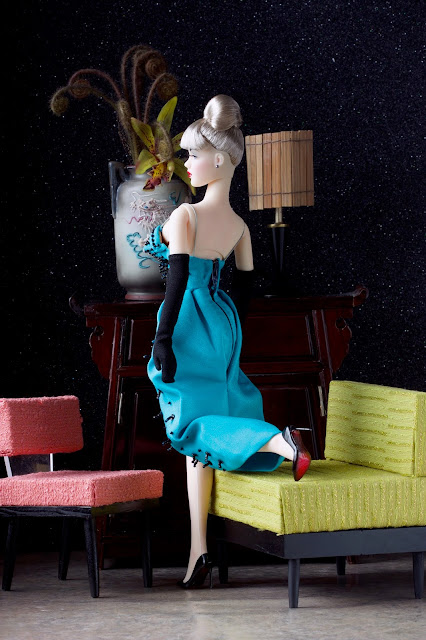 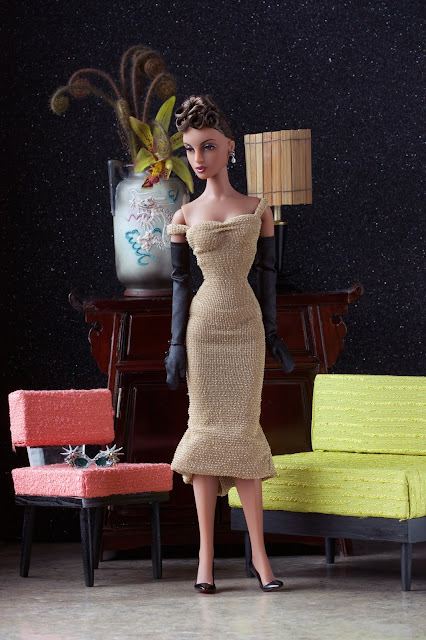 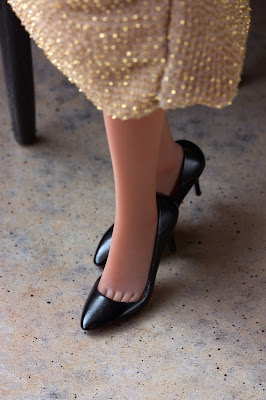 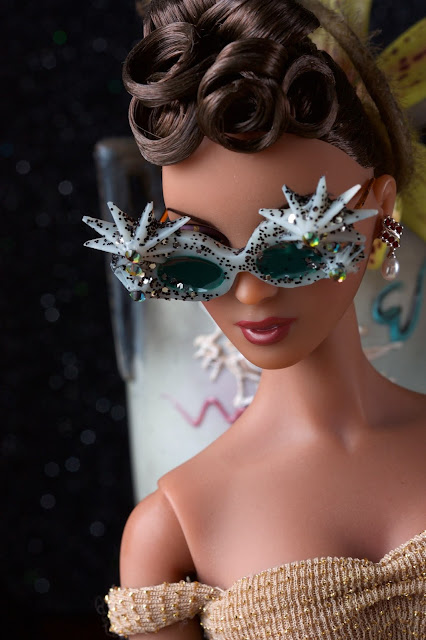 The film was a hit!

LizRetros' Boutique - for shoes and all other forms of beauty and glamour!
Posted by Ernesto at 10:53 PM 1 comment:

A Visit with Anouk

Anouk, la poupée mannequin by Nav Sikand, visits Dolldom once again, this time, to enjoy posing for the camera leisurely, with no other purpose but to have fun modeling her finely crafted fashions.

As confusion and stress seep into our days, redressing and contemplating the beauty of a fashion doll is a sure fire way to find delightful relaxation. And Anouk, in any of her varied looks, brings, along with her soothing presence, a sincere invitation to play. 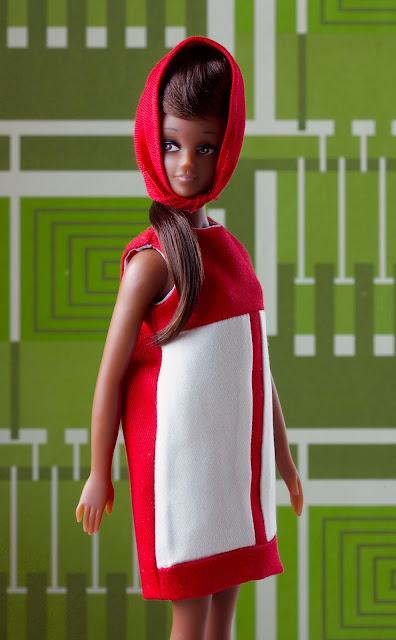 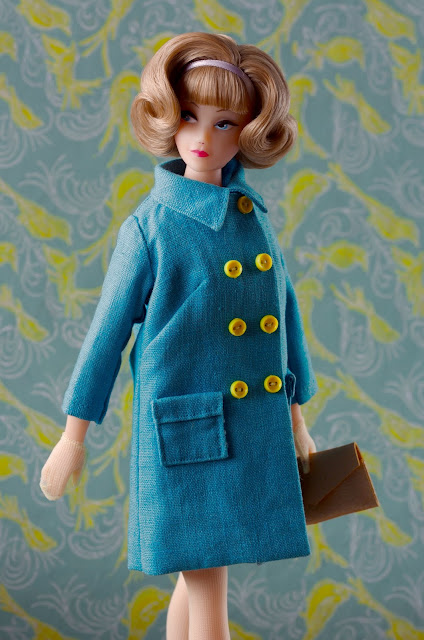 Editor in Chief. A third generation ash-blonde Anouk dresses the part in the precisely cut "Cherbourg". 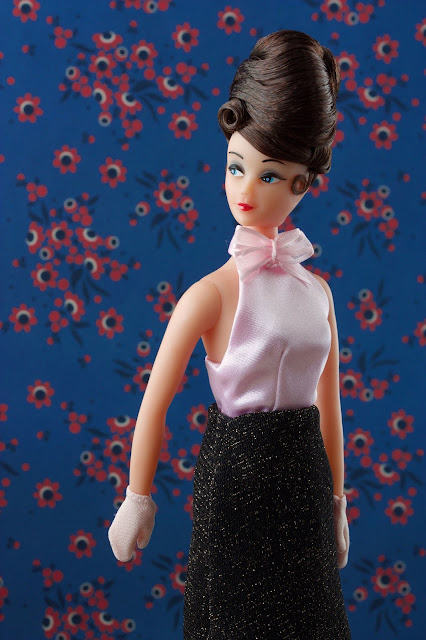 We all need to smile. It's a form of therapy. Try it! Just smile and you will feel better.

Now, if the proposed task seems to be hard to achieve due to current events, then take a look at the following portraits of Michael Ben's Sophine de Paris dolls as they are sure to make you smile. The ambiguity of their bonhomie lends itself to interpretations that, in turn, may lead you to an even more enhanced state of good humor. Why are they smiling? Are you part of their secret? Do they know what you did last summer? The possibilities are endless.

Beautifully realized of quality vinyl and Saran hair fibers, Sophine is a modern take on the vintage Sophie doll by Peynet. Dressed in a Rosina Haskell glittered gown and in vintage Maddie Mod, two Sophine the Paris gals bring cheer to your fashion show. Stay tuned for more on Sophine! 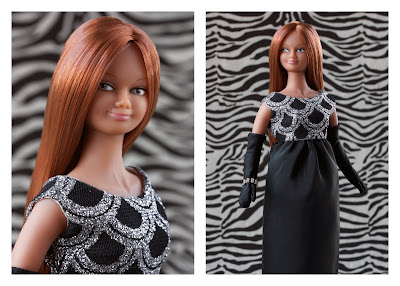 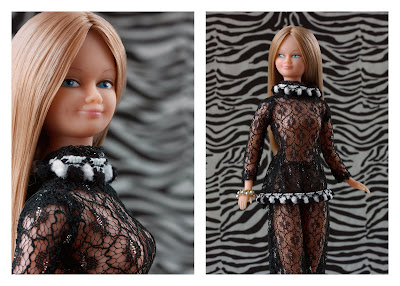 Her Own Signature, Her Own Style


A Tribute to Tyler Wentworth 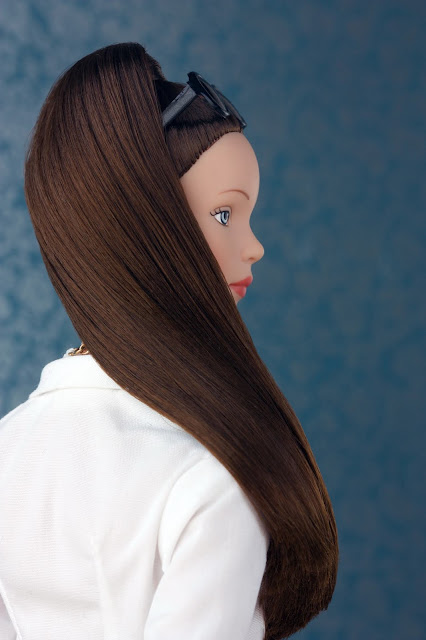 One of the many beauties of doll collecting is remembering the first impression that a doll leaves engraved in one's memory. For Robert Tonner's Tyler Wentworth's 20th anniversary, it seems fitting to put into words Dolldom's initial meeting with the now legendary fashion designer. It was late in December 1999, when Dolldom went by MUNI bus to downtown San Francisco's FAO Schwarz to pick up a pre-ordered brunette Tyler Wentworth "Signature Style" doll. Once home, Dolldom opened the slender purple box and moved the silky tissue away. There she was - Miss Tyler Wentworth! 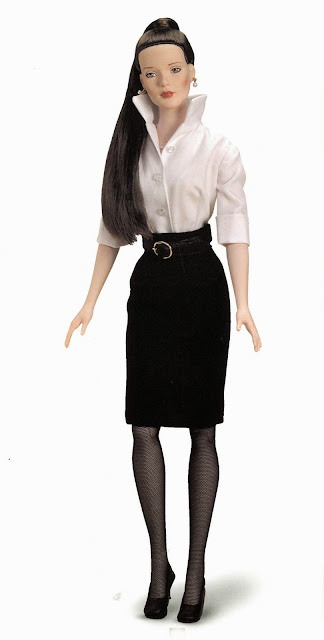 Surprisingly different from the haughty and more mature-looking prototype doll advertised on-line and in every doll magazine at the time, the actual production Tyler was a young woman with an idealized yet realistic sculpt enhanced minimally with a subtle face-up. Where Mel Odom's Gene Marshall was the exuberant Hollywood beauty with the ethereal gaze, dressed to the nines, Tyler was the no non-sense, fresh-faced youngster in a sober uniform and dark glasses, a nod to the always impeccable Carolina Herrera. 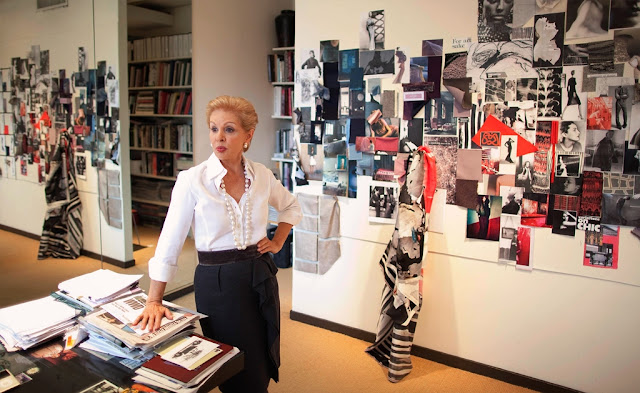 Dolldom was immediately captivated by the aesthetic. Once out of the box - the ease of untying those white ribbons! - and on her hefty Lucite stand, Tyler beckoned the viewer to study her as the light in the room played with her features and revealed her character. From that moment on, Tyler Wentworth and her ever-growing group of friends, family, and even foes continued to populate Dolldom's collection, but it has always been that first "Signature Style" brunette the doll that has held our heart.

Tyler Wentworth's story and story line are both now part of the history of the fashion doll and its renaissance at the turn of the 21th century. Lucky are those who lived the excitement of the times - a period when collectors went to stores to hand-select their newest babe, paying attention to little variations in face-paint and hair. As for the legacy of Miss Wentworth and her creator Robert Tonner, it's undeniable given the depth and breadth of her collection, one that delighted us for more than fifteen years.

But on a personal level, "Signature Style" Tyler Wentworth impacted Dolldom more than just in my collecting pursuits. To this day, Dolldom voluntarily wears a uniform to work - our own version of her "Signature Style". For such is, dear collector friends, the real power of play. 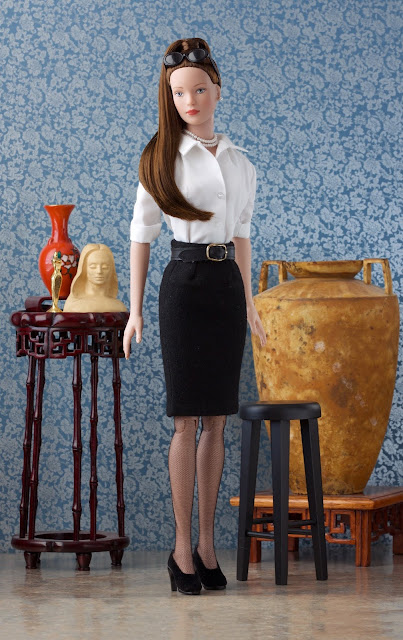 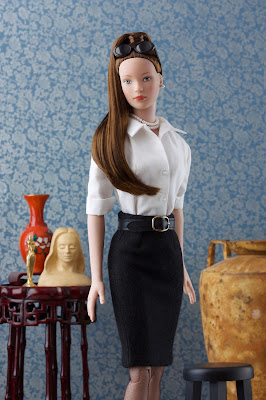 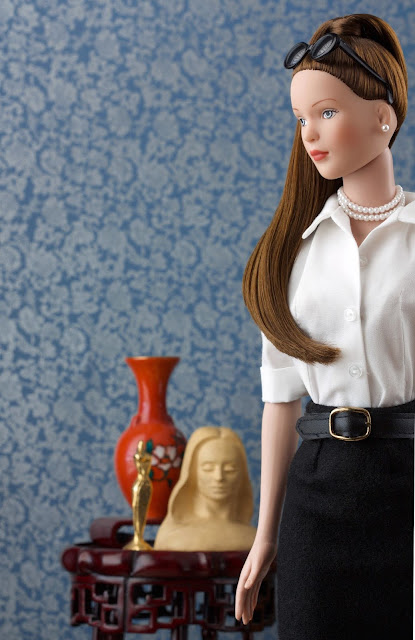 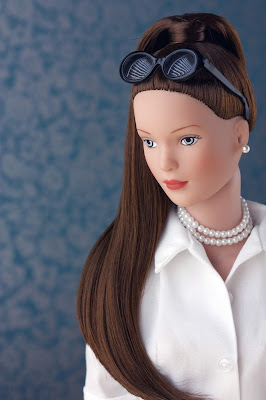 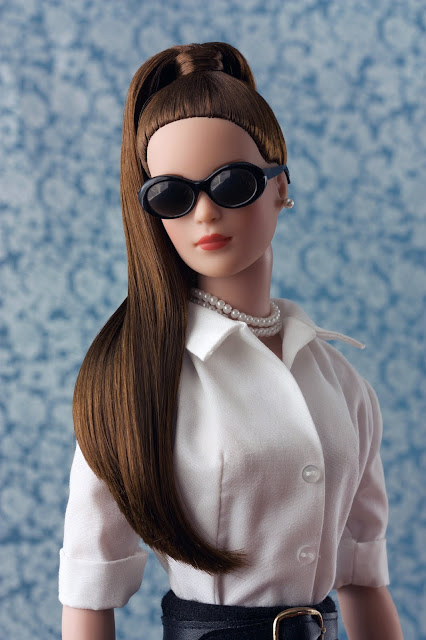 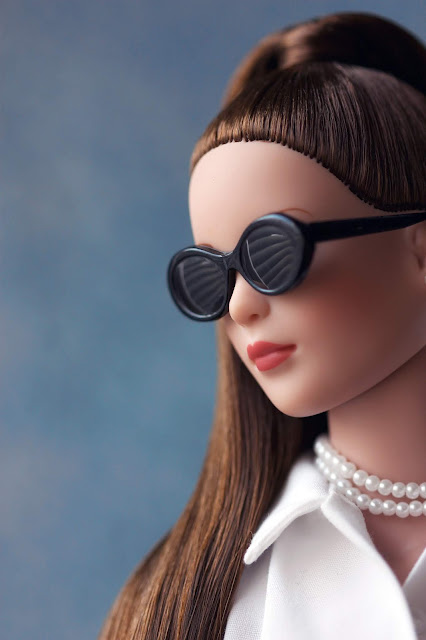 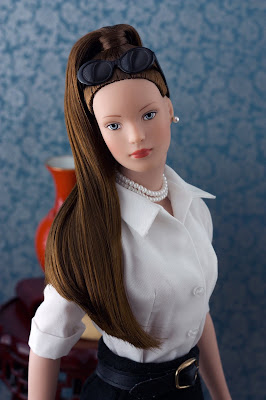 "Signature Style" Tyler Wentworth redefined the concept of a basic doll. In her luxurious wool and crisp cotton uniform and her high ponytail made of the finest Saran fibers, she was a fully-developed character with a strong work ethic and commitment to the House of Wentworth started by her aunt Regina.