All of them fly.

It is Dolldom's firm belief that dollectors enjoy their pursuit as much for the aesthetic pleasure as it is for the illusion of being able to go back in time: to childhood, to adolescence, to that period when make-believe, when fantasy, when everything, it was felt, was possible. Manipulating the artifacts of the past or those reproduced to evoke the period initiates a process in which glimpses of sensations or filed-away memories come back intact. And the dollector is transported. Not bad for a 40 dollar investment, in the case of today's entry.

Back in 1976, Mattel introduced a new Barbie doll sculpt titled SuperStar. With her ultra bright smile and wide-eyes, the Barbie doll entered the world of children at heart with a qualifier, a set identity that, to some, broke away from Ruth Handler's original idea of doll as blank slate onto which to project one's fantasy. To others, it was a logic progression: the teen-age fashion model had become a superstar, not unlike the many super models of the period.  And super models and super stars all went to the disco, Studio 54 to be exact, and hung out with Andy, Bianca, Liza, Halston...

2021's reproduction of 1977's SuperStar Christie, beautifully rendered in her yellow satin gown and silvery boa, is our golden ticket to a night of dancing and glamour. Are you ready? And who better to escort us in but Maximilien Hadefi with his 1975 hit "Come un oiseau qui s'envole", covered gorgeously in Spanish in 1977 by Nydia Caro as "El amor entre tú y yo". Yes, it's French and Spanish night at Dolldom's disco. Take your pick.

SuperStar Christie, do your fine thing... 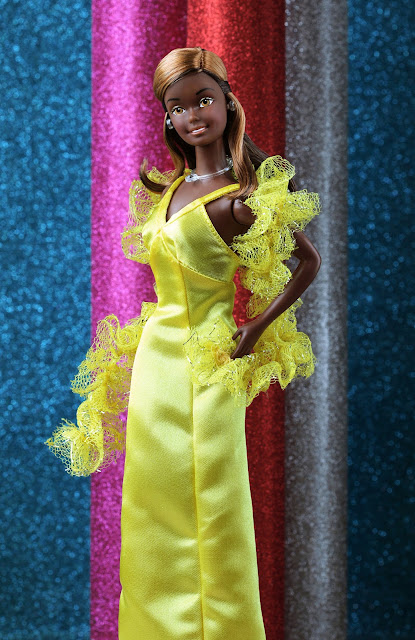 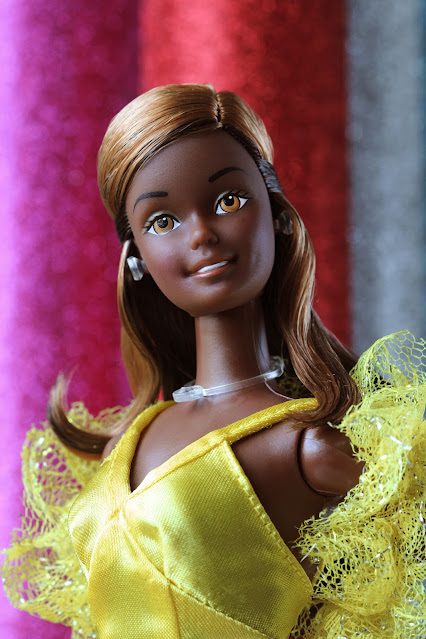 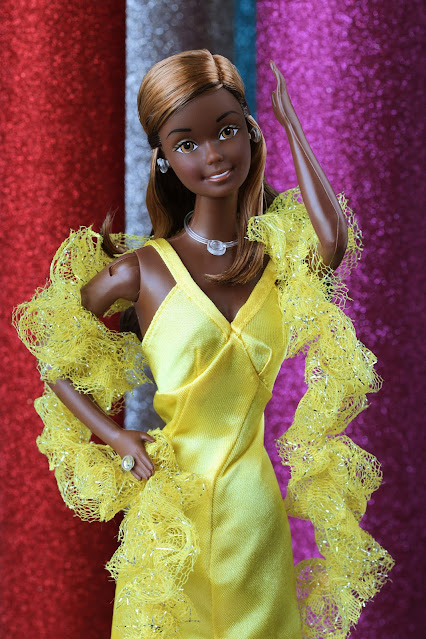 Mattel's recent reproduction of the Black Francie doll reignites Dolldom's passion for the styles of the late 1960s. And "Floatin' In" Francie is the perfect model muse to star in a little adventure into the world of Crest of the Hill Knits' (formerly Hill Crest Barbies) hand crafted fashions.

Associated with the homemade, knitted garments are often overlooked and under appreciated by collectors of fashion dolls. But Dolldom is sure that this Black Francie and Crest of the Hill Knits combo will surely whet your appetite for a little yarn. Knitted specifically for the slender silhouette of Barbie doll's MODern cousin, the looks reference Flower Power, YSL and Emma Peel. Isn't that groovy?

Crest of the Hill Knits on Etsy 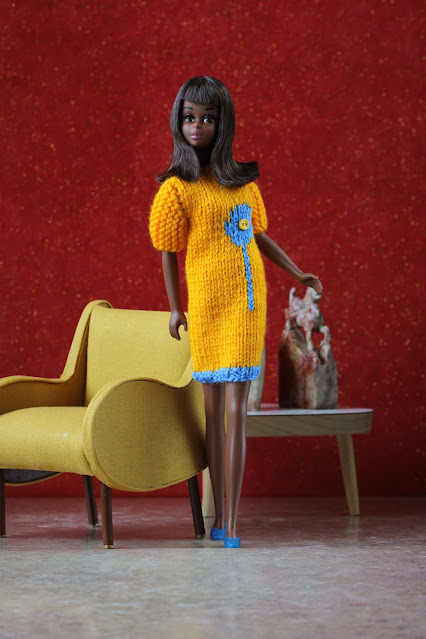 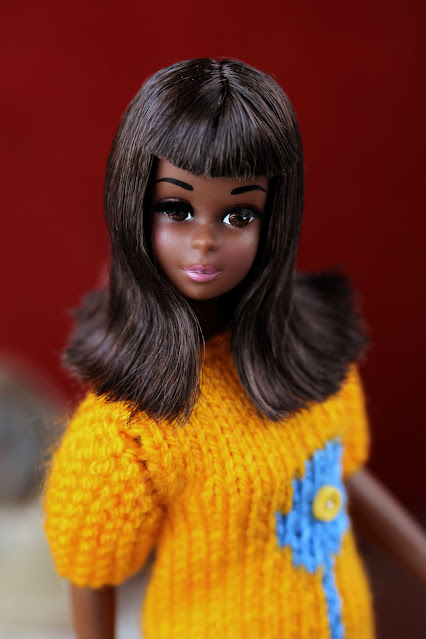 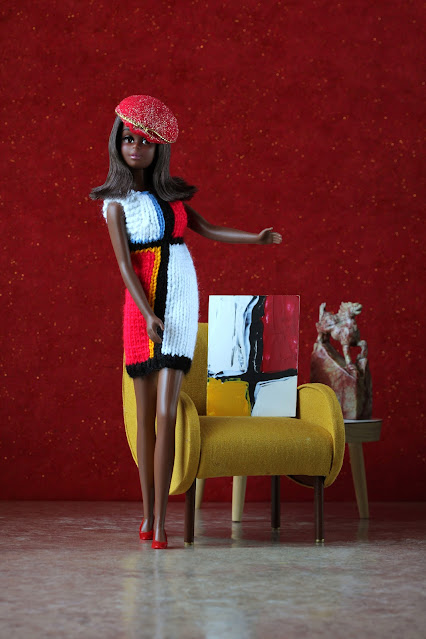 The reference to YSL's famous Mondrian dress is there but with a glittered driving cap by Maryann Roy and her swinging attitude, Francie takes the look out of the museum and into the streets of Swinging London. 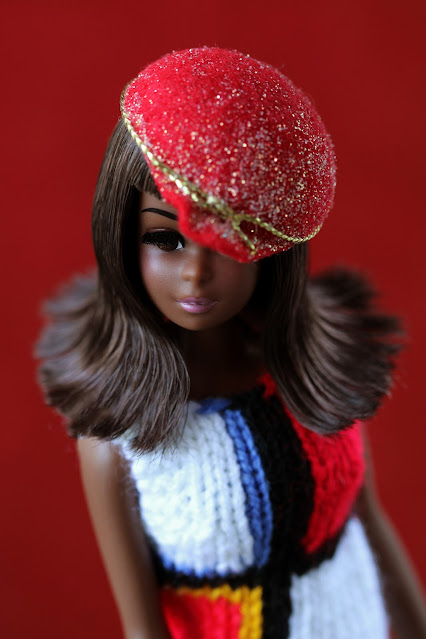 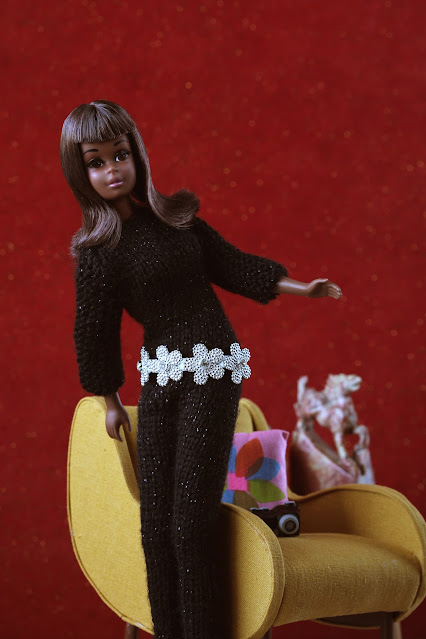 Cause a gal needs to have a black catsuit! Knitted to fit like a glove, Francie's jumpsuit features shot-with-silver-thread black yarn for extra glam. 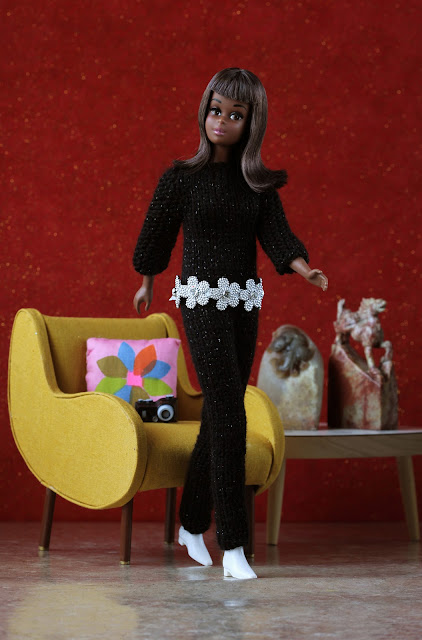 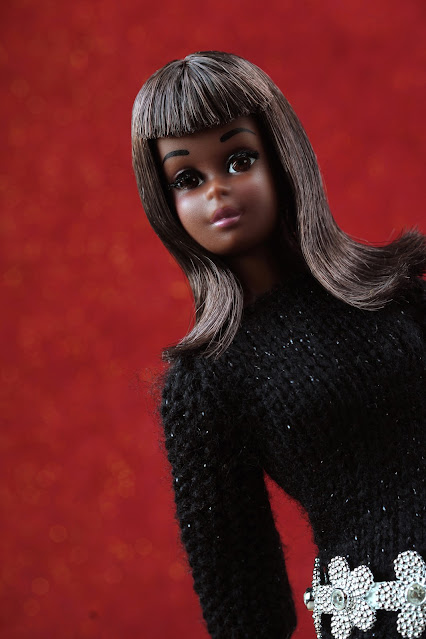 Credits:
All fashions by Crest of the Hill Knits on Etsy
Driving cap and "apostrophe" chair by Maryann Roy
Table by Darren Cole for LizRetros
Note: Francie's hair was restyled for these photos. The restyling consisted of washing, hot water straightening and then careful trimming of the ends.