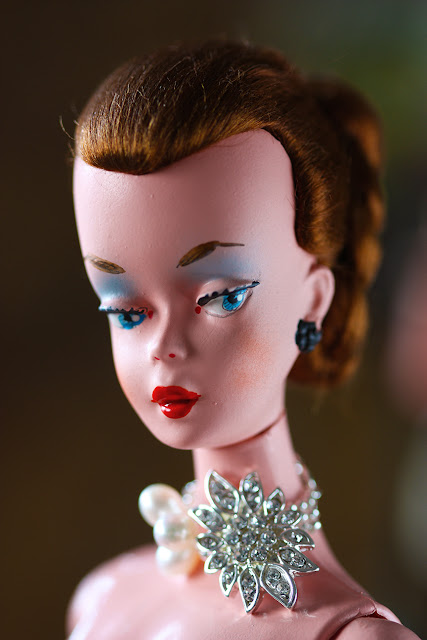 Wintry November days call for an urgent dose of beauty and glamour. And who best to provide the much needed treatment than Lilli Lalka? Her plan: a very warm bath, new lingerie, a gift of jewelry and another one of art. 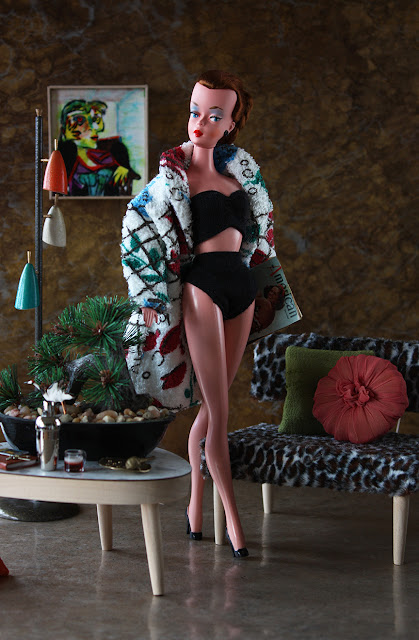 After an only-for-me-bubble-bath and perfumed powder session, Lalka models black underwear and a cozy terry cloth bathrobe by Liz Cole for Retros in front of her latest fine art acquisition by David Montreal for MadebyMeeee. Later, she tries on her latest gift: rhinestones and pearls transformed as only Joy Jarred can. Lilli Lalka's room is beautifully furnished by Darren Cole also for Retros. 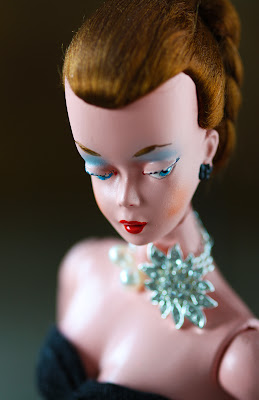 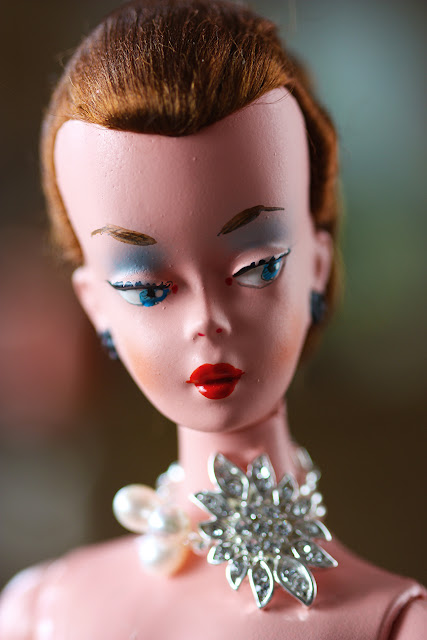 Lilli Lalka by Julian Kalinowski poses for our cameras with her unique brand of coquettishness. 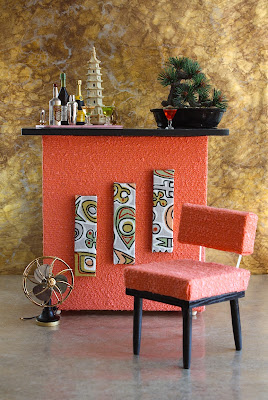 "There seems to be within all of us an innate yearning to be lifted momentarily out of our own lives into the realm of charm and make believe."
--- Dorothy Draper

Most dollectors would readily agree with the fabulous Miss Draper, doyenne of American decorating and iconic tastemaker, for it is in very often in our collections that we find the much-needed respite from the travails and humdrum of our personal and professional lives. And nothing adds more to the enjoyment of a fashion doll display than a well-appointed room, a realistically detailed environment, in which, perfectly posed and dressed-to-the-nines, dolls live out the many fantasies and dramas concocted for them by their dotting keepers.

Darren Cole, Ann Morrison Maillard and Ron Shivvers are three freelance master artists who currently produce the very best in handmade furniture for various sizes of fashion dolls. If you, like we at Dolldom, believe that the future of fashion dolls is handmade, you will also agree that investing in the acquisition of their finely crafted pieces is a sure-fire way to add layers of meaning and substance to a diorama. Be it for the sole shelf in the studio apartment or for the spacious cabinets of the doll room, these miniaturized furniture masterpieces will engage not only those who appreciate doll art but also anyone interested in interior design and excellence in craftsmanship.

Darren Cole is a collector of furniture from the 40s and 50s (Haywood Wakefield being a favorite) with which to decorate the 1943 Cape Cod style house that he shares with his lovely and equally talented wife Liz, designer of the famed Retros line of handmade doll clothing A while back, Liz enlisted Darren to create mid-century doll furniture to go with her hand-sewn doll fashion creations. But once friends and colleagues saw Liz’s dioramas, it was impossible to keep it in the family. Darren’s knowledge of mid-century modern style is evident in his exuberantly happy creations in both one-sixth and one-fourth scales. 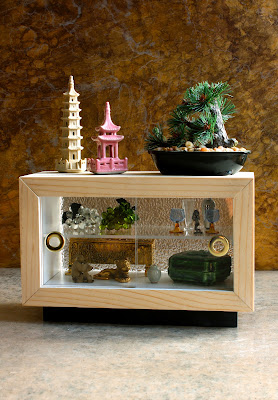 My Doll’s a Collector
This credenza display cabinet is made of .75-inch pine with light maple wood veneer. The interior is painted white with a clear Plexiglass shelf that holds a doll’s treasure trove. Two clear Plexiglass sliding and a back crinkle-textured clear panel allow as much light as possible into the cabinet. A small light may be placed behind it for added effect. 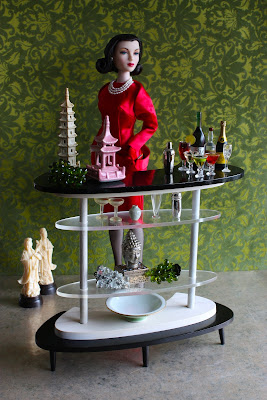 What a Swell Party
Gene Marshall welcomes all for cocktails. Her Italian style bar boasts Plexiglass shelves and a black lacquered wood top. Mr. Cole interpreted a Mid Century Modern Italian design that he found in a book to satisfy two important functions: drinks and display.

Thrilled to the core as a child by her sister’s Barbie’s Dream Kitchen, Annie Morrison Millard’s infatuation with the miniaturized world of the iconic doll, led her to create Morrison’s Furniture Studio. Her amazingly detailed furniture pieces have garnered her an enthusiastic fan base, this writer included. One of the best compliments that Miss Morrison has ever received was from a gentleman who wrote to her for the measurements of a sofa and coffee table she was featuring on e-Bay; he wanted to be sure it would fit up the stairs to his apartment. 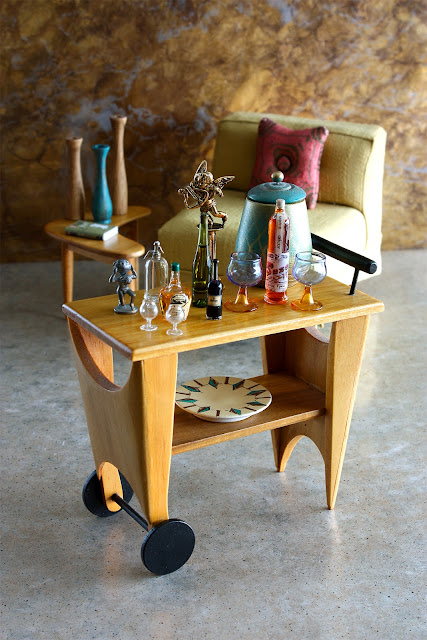 Cocktails on a Roll
Miss Morrison does much of her woodworking with a band saw, scroll saw, and belt sander. The drill press is her secret weapon. She loves to use good wood, such as cherry, maple or oak. However, the scale of the grain needs to be right, as well, as seen in this rolling cocktail cart. 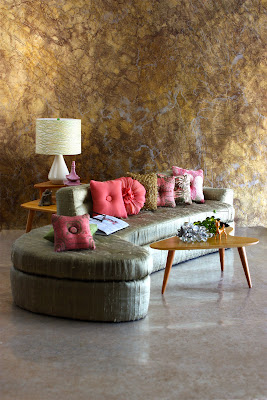 Luxury Suite
Annie Morrison believes that although Barbie was given a couture wardrobe, a handsome boyfriend, and excellent accessories, she needed a well tailored home. This set exemplifies Miss Morrison’s philosophy that a doll’s display should be as fabulous as the fashion and accessories she wears. Mid-century modern has inspired Miss Morrison since long before it was called by a name. Danish Modern, Eames, Nelson, Heywood Wakefield, Lane—were all names that meant something to the artist because they indicated solid, clean and, in her opinion, timeless style.

Ron Shivvers’ love of the woodcrafter’s art is evidenced in everything that he creates regardless of the scale. In fact, Ron’s mastery of his craft for human-sized furniture is exactly translated into one-sixth scale. Ron’s aim is to allow the natural beauty of the wood to take center stage and never stains or dyes any of his designs. Mr. Shivves crafts his furniture with the hope that it will become the treasure of tomorrow and an inheritance for generations. 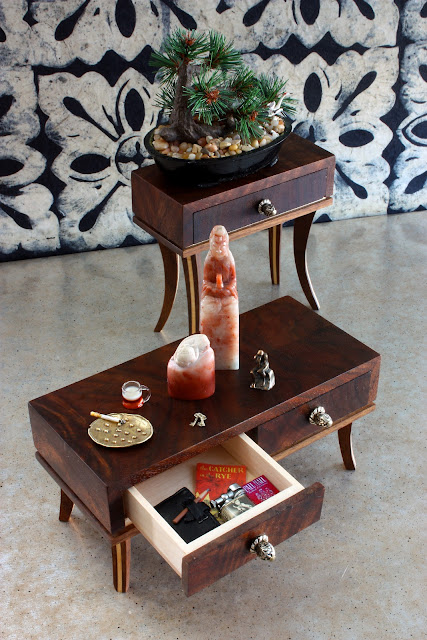 Order in The House!
Everything has a place in Ron Shivver’s realistic tables with functional drawers created in miniature from one of his signature designs for humans. The inside-outside curve and taper of the leg is not only beautiful and unique but adds strength, stability and overall balance to these beautiful pieces of furniture finished with permits the wood grain to continue over the edge of the table. 1:12 dollhouse keys created by Cliff Feltrope. 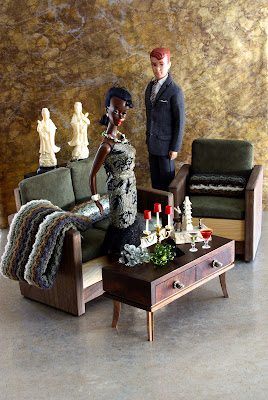 Home Sweet Home
Lilli Lalka and Allan show off their new entertainment center furniture set by Ron Shivvers. Ron finely sands and hand-rubs his creations with Tung oil to a smooth satin finish that is resistant to stains from moisture. In cozy forest green suede, the set’s pillows provide warmth for many a chilly evening. Hand-knit throw and bolster pillows created by Christine Ward for Dollyknickers.

For more on these featured artists, check out the November issue of Haute Doll magazine. 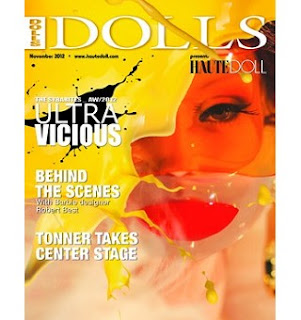 The beauty of a doll is all in the eye of the beholder. For us at Dolldom there are dolls that possess a special attraction, one that may be due to their relative beauty and also to their role and place in the history of society and it's evolution.

In this portfolio, also published in the current issue of UFDC's Doll News, Dolldom looks at the beauty of dolls meant to convey the idea of belonging to a dark-skinned phenotype. Some have original sculpts other simply recycle the ones created for light pigmentation dolls.

All doll collection reflects the hopes and dreams of its creator and Dolldom's utopian perspective is beautifully diverse. 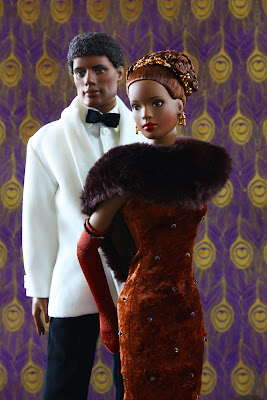 Bronze Goddess Esmé, circa 2003, poses with her beau Russell Williams who wears the classic Shall We Dance, circa 2004, from Basil St. John’s line by Effanbee. Dressed doll Esmé and Russell are by Tonner Doll Company. 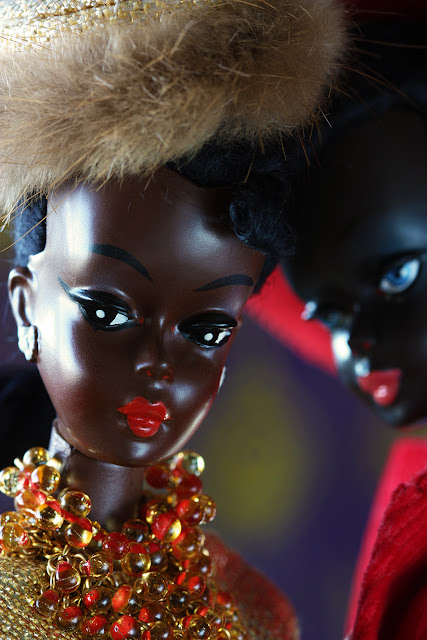 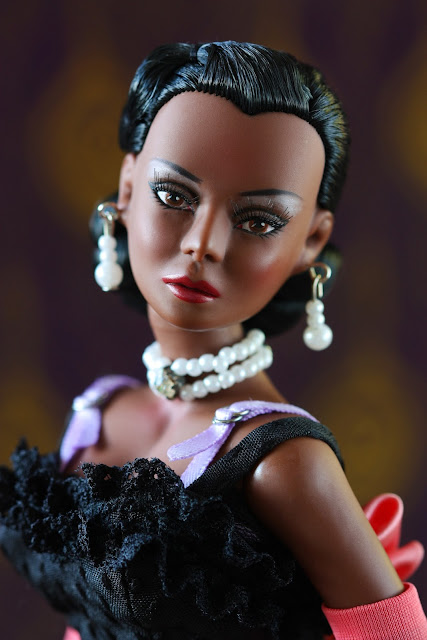 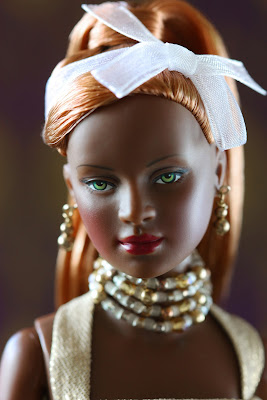 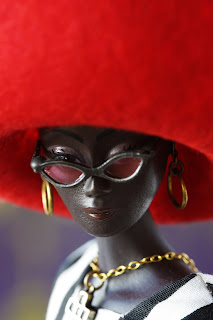 Dim Dam Dom Tzulli by BillyBoy* and Lala, circa 1995, is a handmade porcelain doll and limited to an edition of 25 dolls. Tzulli is Dheei’s teenage sister 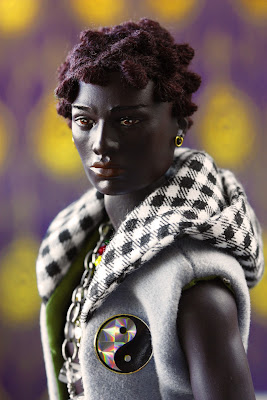 Techno D.J. Jobii, circa 1999, is the brother of Tzulli and Dheei. A beautiful rendition in porcelain by BillyBoy* and Lala, the doll was handmade in France. 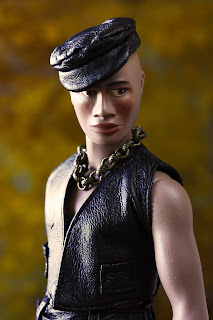 Porcelain Sailor Pizza Party Zhdrick, circa 1996, wears Biker Boy, circa 1993 and made for the earlier resin versions of Mdvanii’s male lover Rhogit-Rhogit and their friend Zhdrick. Doll and fashion by BillyBoy* and Lala. 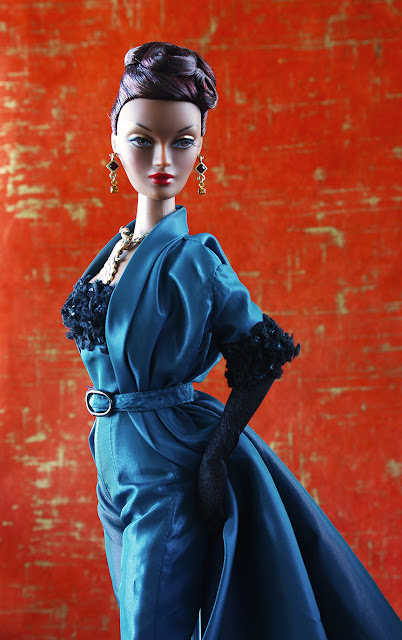 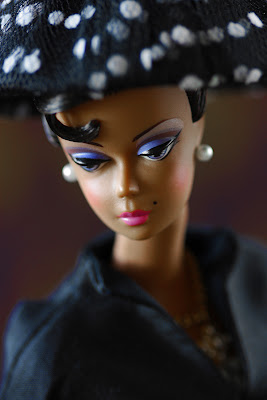 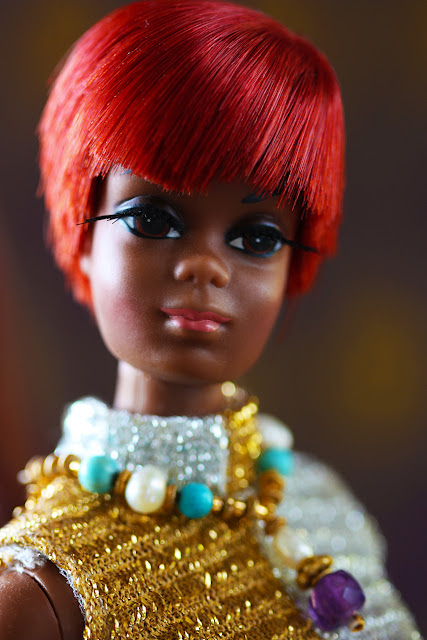 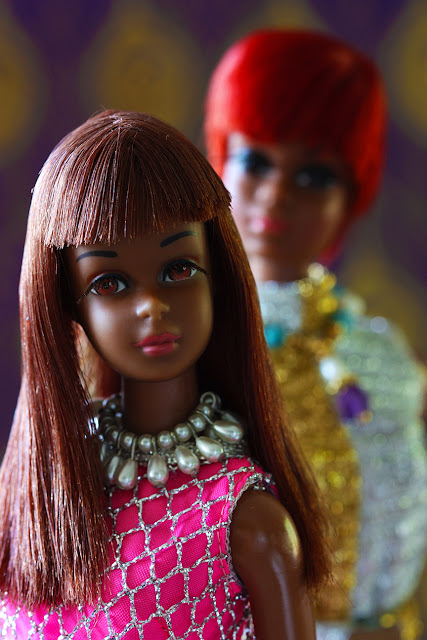 Mattel’s groundbreaking dolls pose together. Black Francie, circa 1967, came before the beautiful Julia, circa 1969, based on the Diahann Carrol television character. 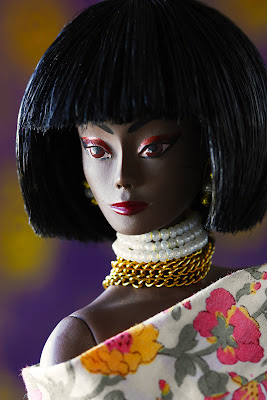