After 20 years of being regaled by the Barbie Fashion Model Collection, designed by Robert Best for Mattel, we're getting close to the end. For the line that brought back the Barbie doll's 1959 sculpt to a rarefied world of fashion, heavy on references to haute couture, will soon become part of the doll's history.

"Best to a Tea" is the second doll being offered this year and like her sister "Best in Black", she is an enchanting presence. Dressed in a Channel-inspired suit, the black Barbie doll has vivid make-up that pops-out from under the black tulle veil of a fascinator hat with fuchsia blooms. Although the doll and fashion ensemble are designed to be a total look, this beautiful iteration of the Barbie doll is versatile and will be a favorite among collectors for redressing. Note: Dolldom's stylists added two classic BFMC cuff bracelets that are not part of the production doll.

As the line's trajectory reaches it's conclusion, it's important to point out that its evolution has maintained a sense of coherence due to Best's vision. At the same time, one must consider the effect that market forces and manufacturing challenges have had on the realization of Best's designs. What was possible in 2000 seems not to be possible in 2020. A line that was predicated on bringing back the details of the Barbie doll's heyday under the direction of Charlotte Johnson, is, 20 years later, making adaptations that divert from its original philosophy. For "Best to a Tea's" undeniable loveliness brings the use Velcro closures to the skirt, blouse and belt. Perhaps a decision made to reduce the bulk created by metal snaps, yet, one that is readily associated with other lines in lower price points. Not that Velcro closures have not been used before in the BFMC ("Boater Ensemble's" halter blouse comes to mind), but in "Best to a Tea", it feels normalized.

This said, "Best to a Tea" is an afternoon delight of sorts, more so now that we collectors know that there's only two more dolls before the Barbie Fashion Model Collection ceases production.

In this Dolldom exclusive, "Best to a Tea" and "Best in Black" gather for an afternoon of fashion talk and tea. Dolldom thanks Robert Best and Mattel for 20 years of steadfast dedication to beauty. 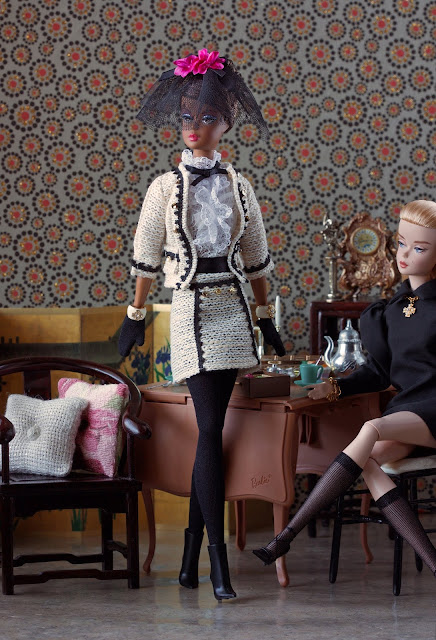 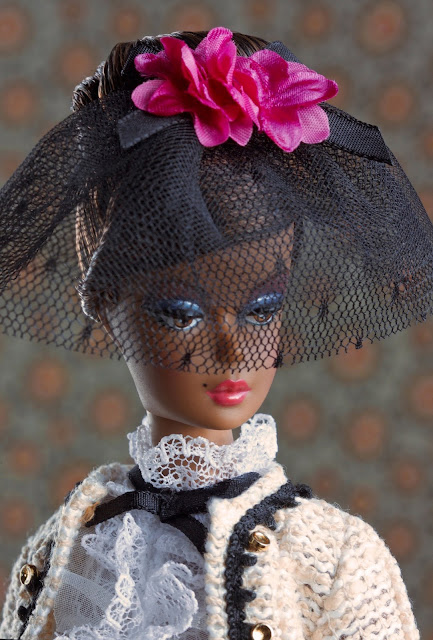 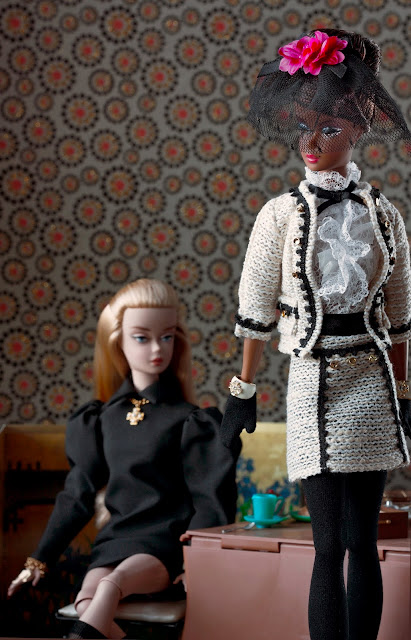 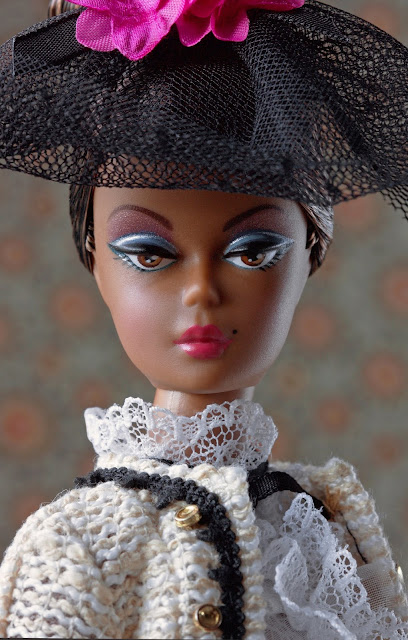 "Best to a Tea" Silkstone from the BFMC

Having seen the fabulous 3-D printed, airbrushed wigs made for the 1/4 scale dolls, Séverine, the iconic doll by Julian S. Kalinowski, asked her dear friend LizRetros for a little pick me up. And the ever-generous LizRetros was happy to oblige not only with an enviable wardrobe of always-perfectly-coiffed wigs in luscious colors but with sensational 3-D printed and hand-decorated sunglasses and a fit-to-impact halter cocktail dress in vintage knit.

For more information on LizRetros' world of B&G, visit her boutique and pick up something unique for your beloved dolls. 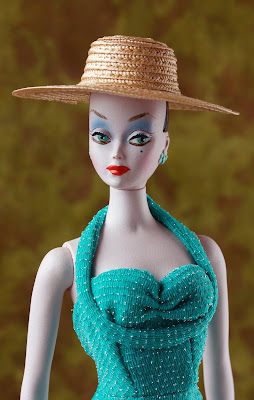 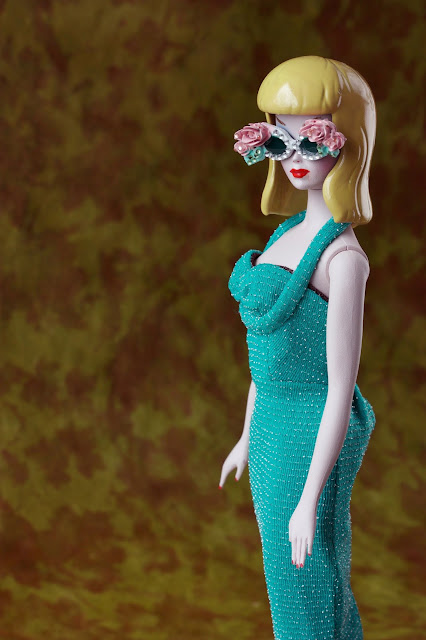 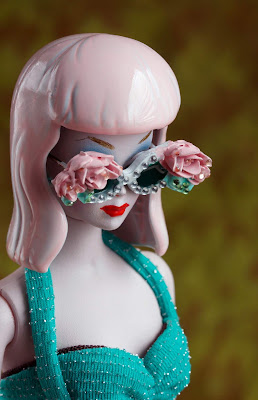 "Baby Powder" is as soft as an angelic kiss. 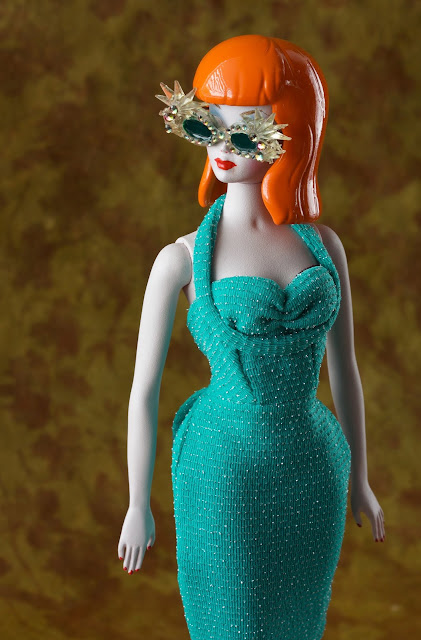 "Orange Is the New Orange" is a color-saturated look, perfect for a tropical vacation, along with "Once in Vegas" sunglasses. 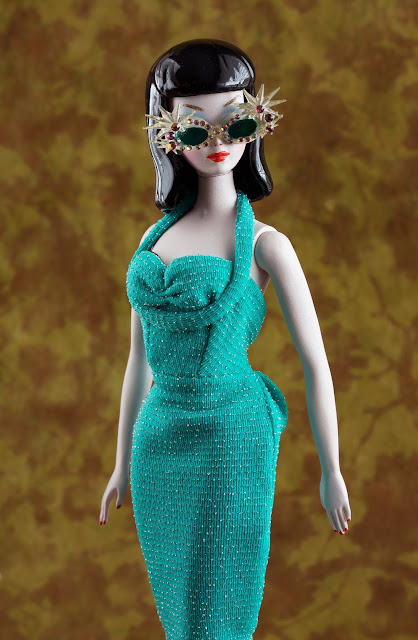 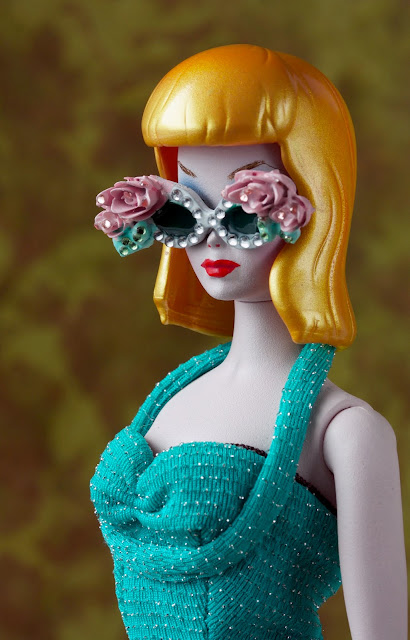 "Goldenrod" is an airbrushed wonder! 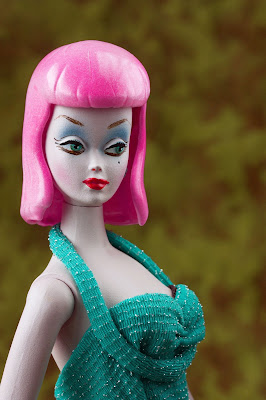 Flat. Fly-away. Out of control. Stylist and barbers sheltering at home. What to do? Beauty and glamour maven, LizRetros comes to the rescue with her new line of 3-D printed wigs hand painted in luscious colors.

Not unlike superstar Gigi Goode in RuPaul's Dragrace, season 12, episode 1, a doll in a Retros' wig exudes the confidence of someone who knows that her face is the focus when framed by a silhouetted mane. 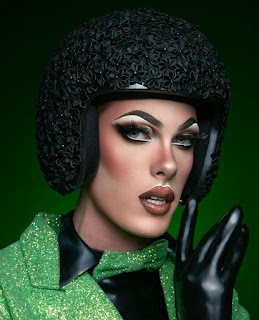 Wind blows, I care not!

For your own wig or simply to have fun window shopping, visit the Retros Boutique. 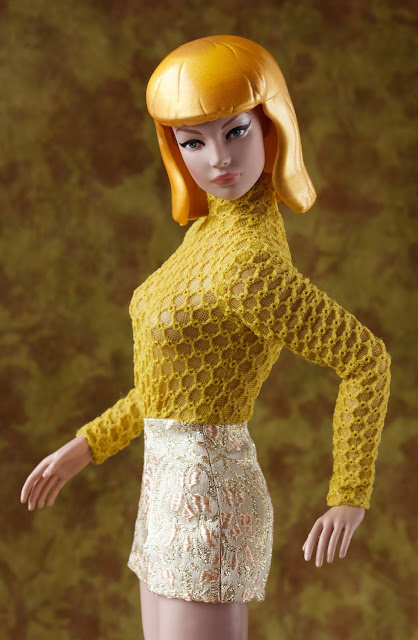 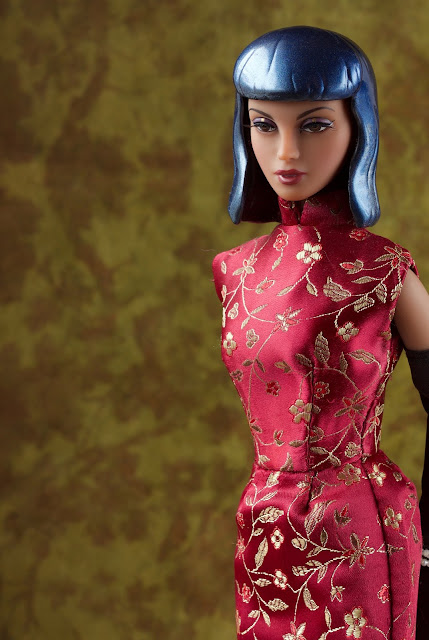 Lady Sings the Blues
Mel Odom's Violet Waters is happy as a clam in "Deep Ocean" and a qi-pao by Rosina Haskell. 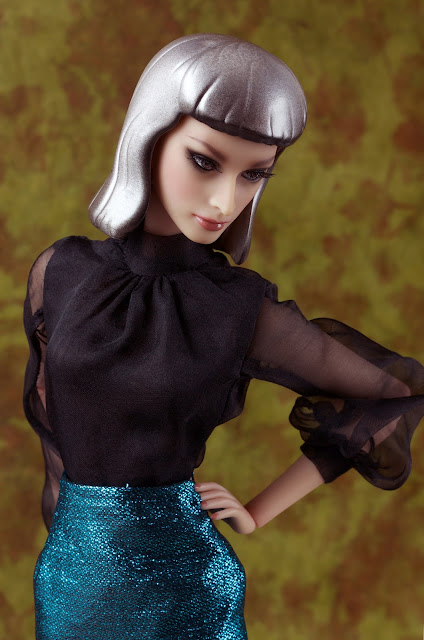 Metropolis
Sofia, by JAMIEshow Doll, is a cool cat in "Peltro". Blouse by JAMIEshow. Skirt by RDDdoll. 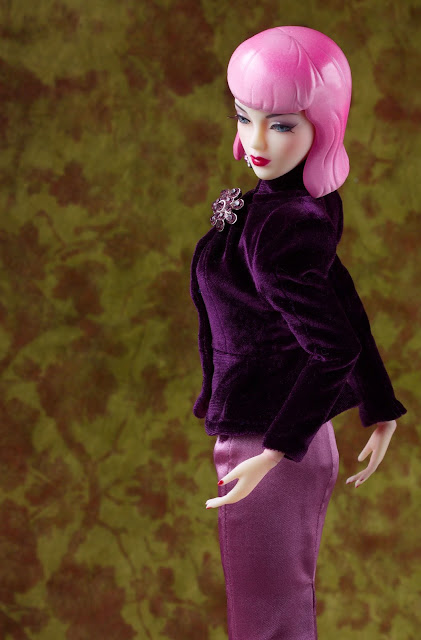 It's accessory time! Nothing makes a favorite fashion even more favorite than the addition of carefully chosen accessories. LizRetros, creator of exuberant B&G (as in beauty and glamour) for the uninitiated), presents a new line of eye wear and bags sure to add allure to your classics.

The new line combines the very best of handmade with 3-D printing technology to produce bags constructed and finished by hand containing evocative 3-D printed motifs. The eye weat designs are also 3-D printed (as seen on Dolldom's previous post Visual Literacy) and then finished by hand with crystals and glitter galore.

Mel Odom's Gene Marshall and friends, as produced by JAMIEShow were elated to join Hollywood's sensation and Dolldom darling Gay Carrington as models for this colorfully fun entry.

Dolldom wishes all its readers a safe and peaceful weekend at home!

For more information or to purchase some of these wonders, make sure to visit LizRetros' boutique. 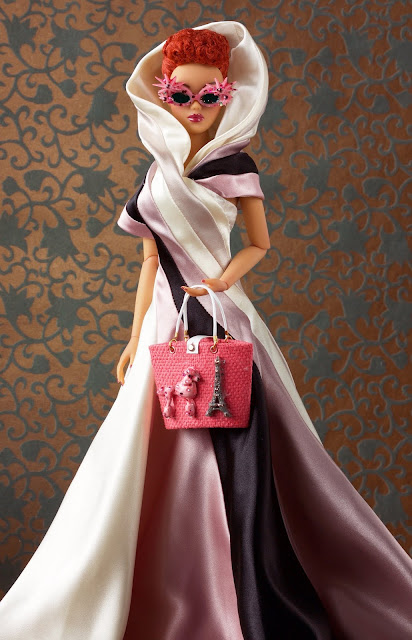 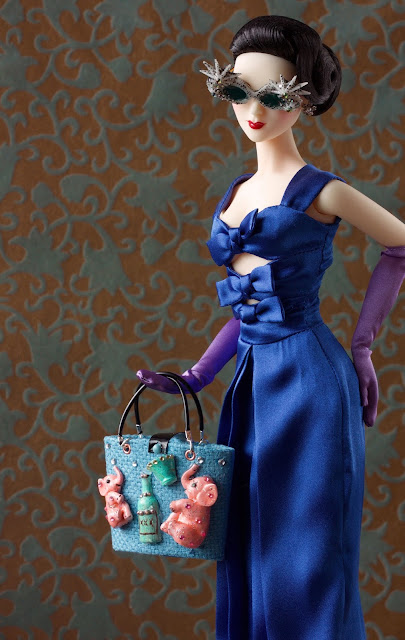 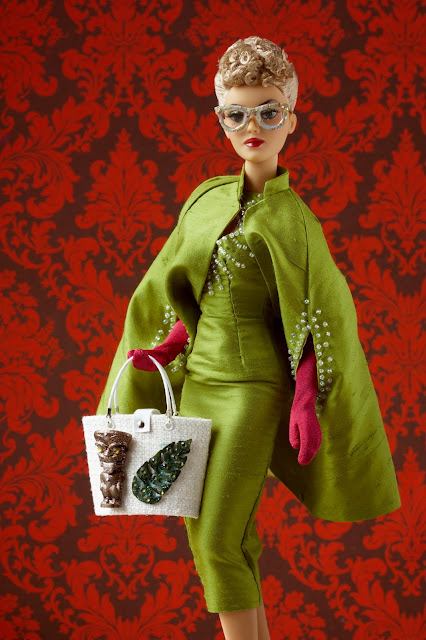 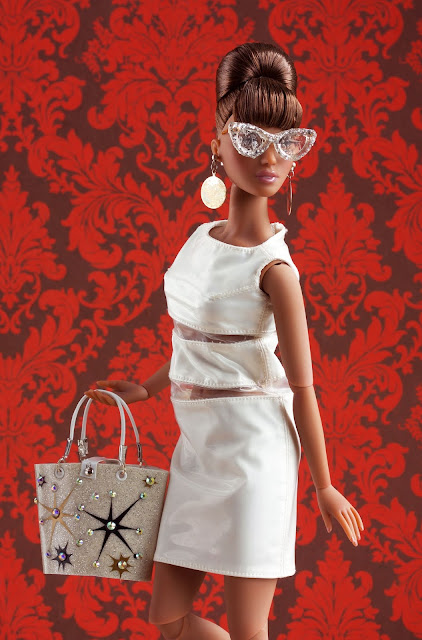 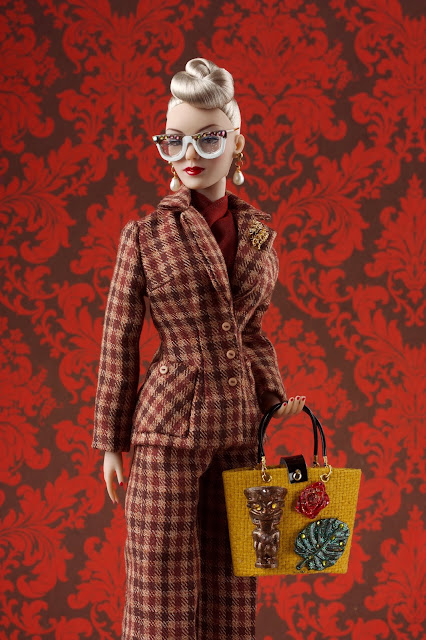 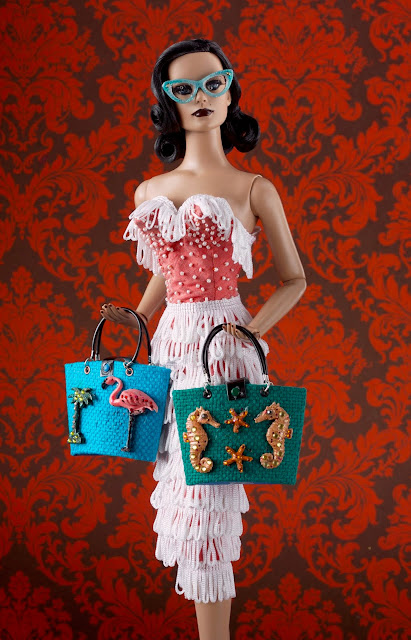 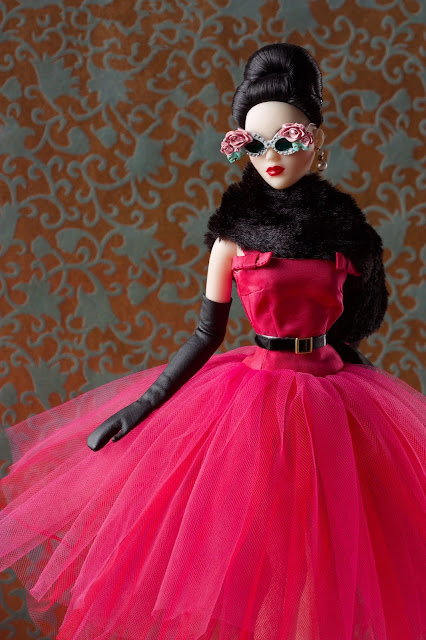 For more information or to purchase some of these wonders, make sure to visit LizRetros' boutique.