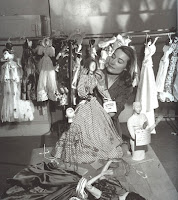 As much as we take delight in the dream fashions, jewelry, shoes, and millinery, we confess being more amazed at the unique character of this consummate model. Made with ingenious wire bodies and clay heads, these ladies humanized the elaborate displays of surreal beauty.

Made to capture the physical and well as the emotional essence of the woman of the times, the face leaves us breathless and longing to see the day when an artist will create - once again - a doll whose face will speak volumes without a drop of paint. Dolldom salutes that magnificently silent face, that remarkably strong face that to this day lives a love affair with the lights and shadows of the displays of The Théâtre de la Mode at The Marryhill Museum of Art.

Photo by VisioLuxus
Posted by Ernesto at 10:38 PM 1 comment:

What Makes A Family?

Ondine, the little girl doll from Sweden, had traveled efficiently in her wooden box along with two dresses and two wigs. Her arrival was celebrated as she came to fill a part of the big void in an old boy's heart. Finally, the old boy could have an elegant little porcelain doll with eyes of gold. She was compact and would travel with him like many of her ancestors had done almost two centuries ago with real children. But after a while, Ondine started to feel lonely. Amidst all the fashion mavens, she longed to have another doll friend, someone who would like to dress up but also have a penchant for getting lost in fake forest sets or find adventures in the pre-war apartment when the old boy was at work. One night, she let him know of her wish and her wish was granted. Soon, Ondine would have an adoptive brother. His name was Eliseo and he was traveling from Córdova, Argentina. 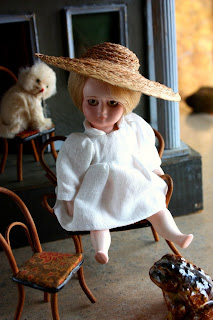 One day, after sweeping her house, Ondine sat outside to await the arrival of the newly adopted doll. But nighttime came with its chilly stars and Ondine had to retire. Days passed and Eliseo did not arrive. Weeks passed and Eliseo still did not arrive. Eliseo had been detained, he was in New York stuck in a horrific place called Customs and no one seemed to be able to get him out of there. Ondine, with her super mental powers and gifts for telekinesis, worked her magic and eight hours later news arrived that Eliseo was free and in transit. But horror of horrors, Eliseo ended up being delivered to a musty and dark bazaar hidden in an alley. The old boy went in and found Eliseo in his traveling box. Once at the apartment, all hands were on task, welcoming Eliseo to the city of foggy air. 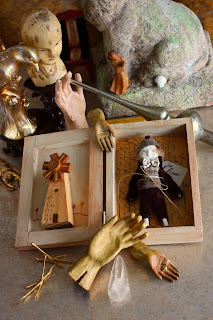 In his elegant chocolate velveteen suit and knit sweater, Eliseo was pure 19th century formality. After writing ten lines for the ballad of his voyage, Eliseo went to look for the little girl whose address he had seen written under his eyelids during a long siesta in New York Customs. But when he got there... 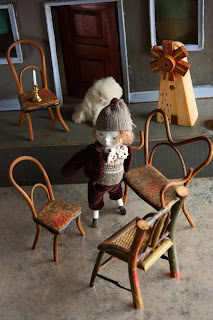 There was no one! Suddenly, Eliseo felt homesick! Et pour comble de malheurs, Eliseo feared that Ondine was gone. Tired of waiting for him, he thought, the blond girl had left. Tears started to make an appearance in Eliseo's eyes. 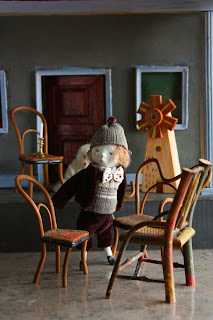 "Hello there!" - a little voice called out. It was Ondine who all the while had been inside the house talking to her pet bird. 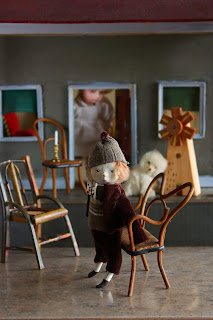 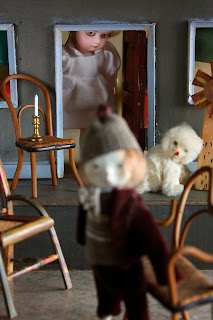 Inside the little house, the imaginary coffee smelled strong and reminded Eliseo of his home country. He offered Ondine a gift: a delectable plaster pineapple that they both could devour with their eyes for many years to come. 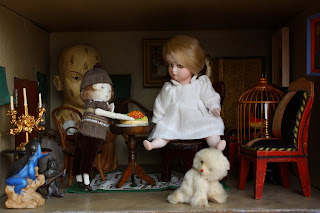 Soon thereafter, Eliseo and Ondine had their first photo as a family taken. The old boy proudly displays it at the entrance of his home. For home is where your childhood dreams come true. 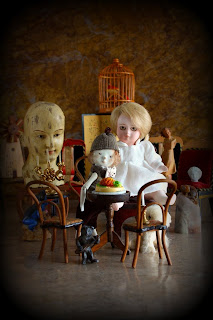 The Future of Dolls - All Dolls - Is Handmade 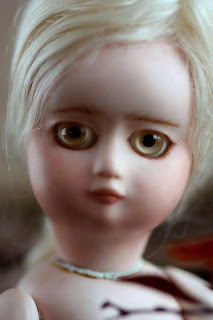 As it had been previously announced here in Dolldom, the way of the future is not the mechanical. Instead of marveling at the wonders of the factory product, the 21st century dollector praises and treasures the work of the artist. Handmade, hand painted, hand assembled - watch for these terms to become increasingly visible not only in print magazines but also in auction sites. What Etsy nurtures, the machine shall not take away. Two examples of the many that abound in the aforementioned cradle of the handcrafted are Katarina Carlsson and Paola Zakimi. 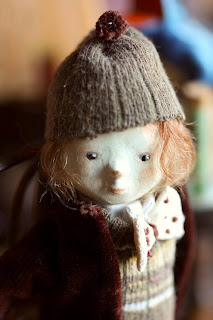 And their ideas seems to be as endless as their magical creatures are devastatingly beautiful. Katarina makes Myling dolls and Paola gives light to the many different characters that populate her fertile mind. Ondine is a six-inch porcelain doll that revives, modernizes, and in our opinion, redefines the classic mignonette concept. Eliseo, a four-inch old-fashioned gentleman who spends his days writing poetry and poetic prose, would make Geppetto cry with joy. Dolldom salutes both of these inspiring doll artists.
Myling
Paola Zakimi
Posted by Ernesto at 8:34 PM No comments: 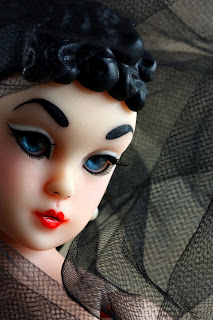 Bambola by Korean artist Jung-Hee Park is one curvaceous lady for whom to look out!
I met Bambola and Hee on Flickr during one of my late night excursions into amazing worlds of photographic innovation. In Hee’s richly styled tableaux, I witnesses Bambola doing things I had never seen a doll do – from hanging out with Salvador Dalí and sporting his moustache to floating in mid air, enveloped in black tulle, contemplating her own face of the floor. 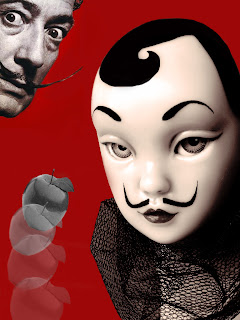 Poster by Jung-Hee Park
Bambola captivated me with her sparkling inset eyes that invited me to enter her daring new world, a realm where the surreal and the familiar had combined in perfect harmony. It takes a lot to seduce this jaded fashion dollector, but Hee’s approach to doll art did it. For in Bambola I found a revolutionary character, coded as a doll, that challenged me to join her in a mission to subvert a system that for too long has been holding on to fixed ideas of what a fashion doll should look like. 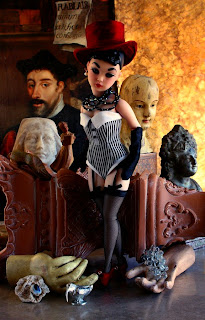 Do not get me wrong, I love the Barbie doll’s svelteness, in both its elegant vintage as wells as its ultra hip Model Muse form. But, let’s be sincere - we have all longed for the day when a doll would come along to defy that supposedly golden standard of female beauty, and to do it with such grace, originality, and sex-appeal that we would not have to choose one over the other. And Hee’s super luscious Bambola does not only that but she also brings the BJD vernacular to the fun of fashion doll play where dressing and redressing is fun therapy for most. 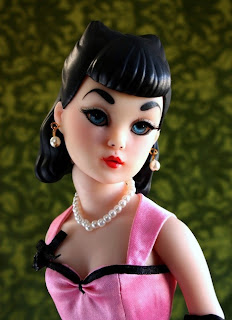 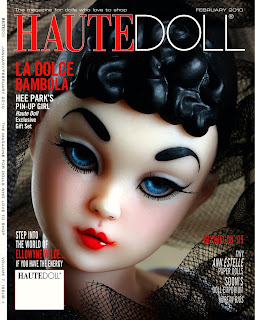 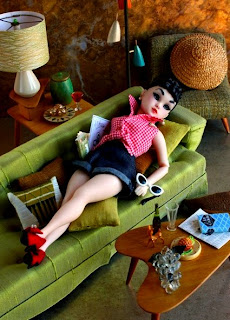 Cocktails, you say? No problem, Bambola will be there in her slinky pink satin dress and dainty handmade heels. Inside her cream leatherette purse you can store Bambola’s tiny metal mirror. Two coal black resin wigs, one with poodle curls, the other with Betty Page-like bangs allow Bambola to go from the pool to the theater with zero fuss and not one fly-away strand of hair to complicate her glamorous photo shoots. Not to say that Bambola will not enjoy wearing other wigs, her perfectly shaped head loves size 6 wigs.
www.bambola-world.com/
www.flickr.com/photos/bambola_world/
www.hautedoll.com
Posted by Ernesto at 10:45 PM 1 comment: