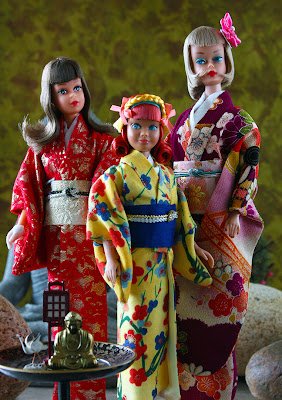 The art of fashion design is appreciated and valued for its attention to detail, careful execution, and originality: all the qualities that exemplify early Barbie style. The interesting dichotomy of the Barbie doll lies in the fact that in spite of being the triumph of vinyl rotation and other advances of mid-20th century technology, the origins and creation of her wardrobe are rooted in a tradition of craftsmanship. A little more than five decades ago, a considerable amount of handcrafting went into the production of the Barbie doll’s ensembles - in Japan. The hands of many Japanese factory workers and freelance seamstresses who worked from their homes collaborated to conceive a product unlike anything seen at that point in toy history. The reduction of scale and the mastery with which the details were achieved, guaranteed the success of the Barbie doll line. Which is why many collectors aspire to possess such examples of sartorial precision. 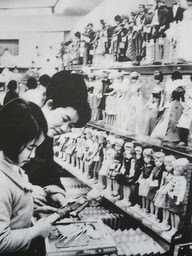 Sylvia Campbell has been designing reproductions for the Barbie doll under the Snowdance Fashions label since 1996. A professional seamstress and a veteran of studio as well as motion picture work, Sylvia now devotes her full attention and efforts to the replication of the most elusive: rare designs created for the Japaneses market - many of which were meticulously researched and documented by Keiko Kimura Shibano in her book Barbie in Japan, published by Murat-Caviale and photographed by the great Barry Sturgill. 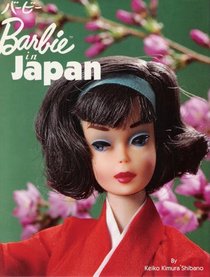 Cover of Barbie in Japan by Keiko Kimura Shibano

Sylvia’s aim is to create a perfect miniaturization using high-quality fabrics and embellishments -sometimes from the same vintage - with the same degree of precision and beauty achieved by Japanese hands more than five decades ago. After sourcing the materials, Sylvia creates the patterns, many times using the original garment. This incredible dedication and attention to minutiae enable Sylvia to recapture that delicious vintage feeling.

In this exclusive feature,  Dolldom profiles Sylvia's masterful execution of kimonos for Barbie, her sister Skipper, and her cousin Francie Fairchild. To close the fashion extravaganza, a magnificent re-imagining of a rare gown shown on page fifty of Miss Kibano's tome. Dolldom applauds Sylvia Campbell for her ongoing dedication to providing collectors with the opportunity to enjoy the beauty of these rare and hard-to-find treasures. For thanks to Sylvia Campbell, admirers of this exquisite period in the Barbie doll's history are able to travel through time. 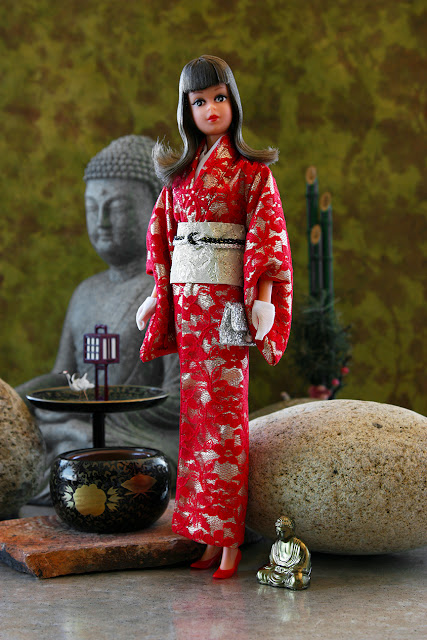 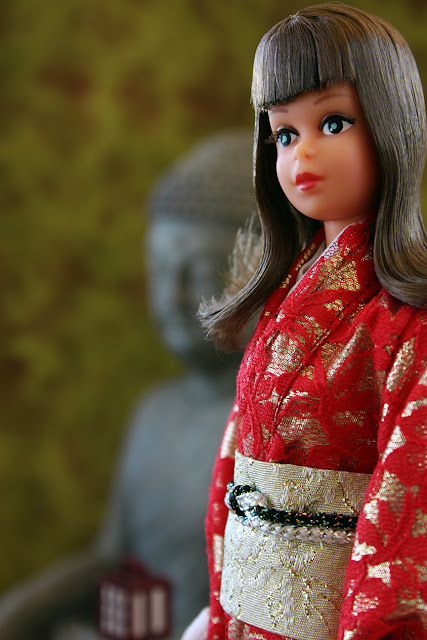 The red lace kimono with gold brocade obi is one of Sylvia's classics for the Francie doll, modeled in this photo by a Japanese market doll. 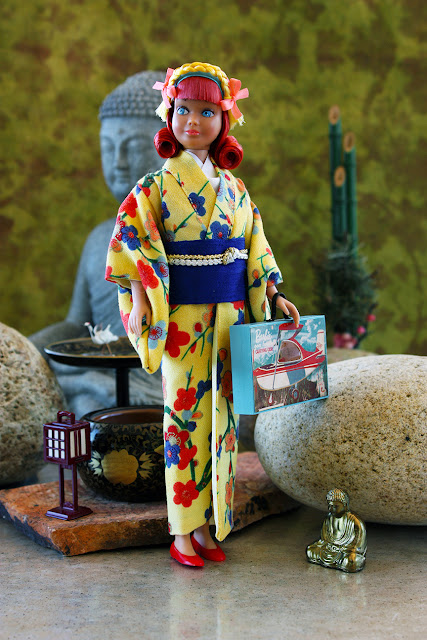 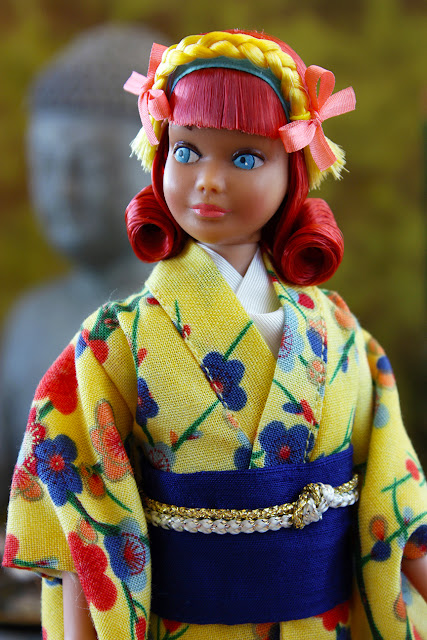 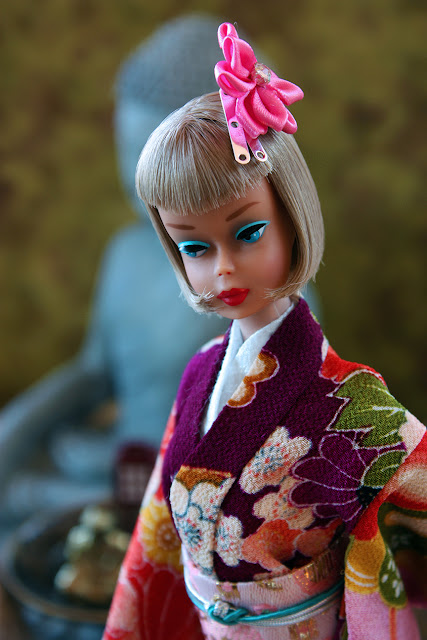 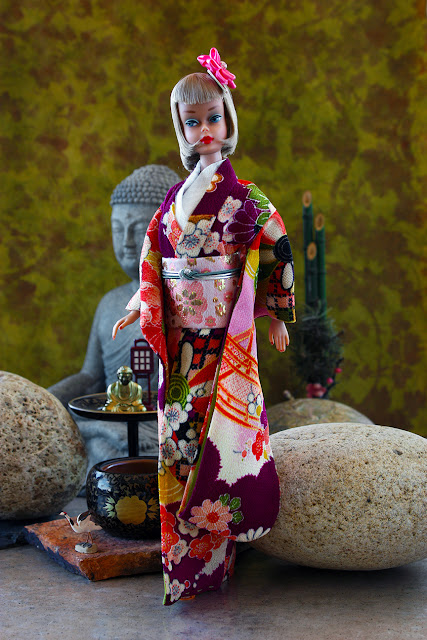 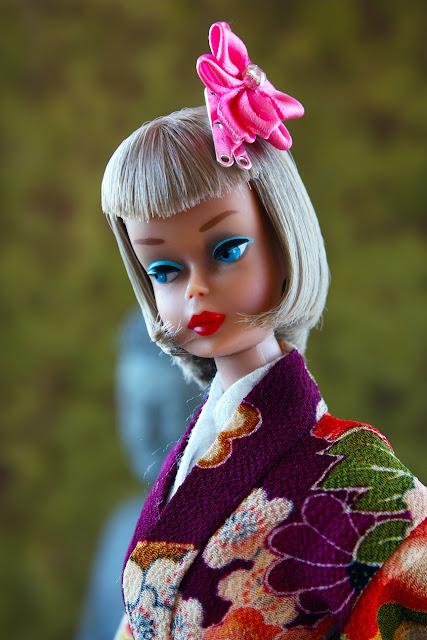 Authentic silk crepe, named chirimen and used for kimonos in Japan is one of Sylvia's fantastic fabric finds. Made in the furisode style with long, draping sleeves, it is worn by an unmarried woman on very special occasions. Patterned and sewn exactly as the kimonos were sewn for Barbie in the 1960’s, this one boasts hand stitching and an obi of gorgeous pink, gold, and mauve brocade. Sylvia used silver and teal soutache braid for the obi-jime cord. Sylvia also created the hair ornament. An undisputed masterpiece. 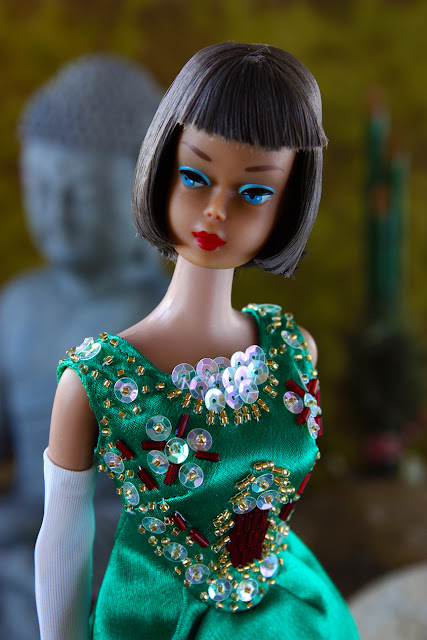 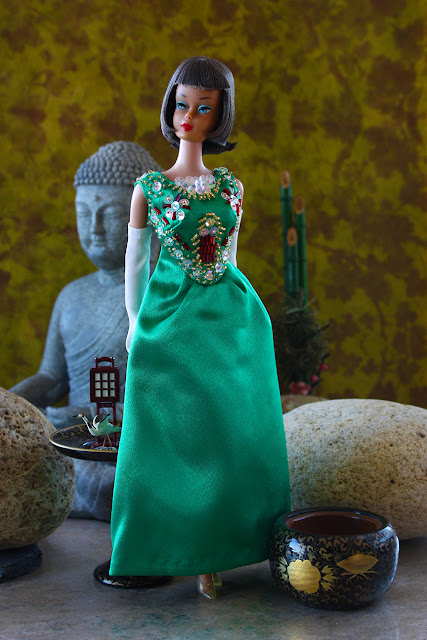 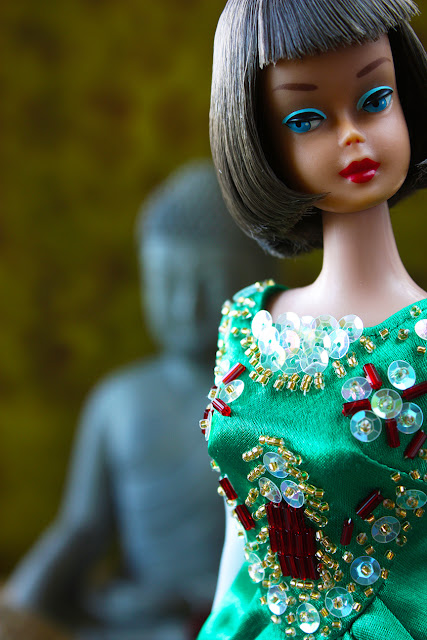 First show on page fifty of Barbie in Japan, this hand beaded dress caught Dolldom's eye and became an obssession. When Sylvia recreated it, there was motive for celebration. Later, Sylvia upped the ante and brought it to the world in emerald - Pantone's color of the year for 2013. The creamy satin silk bodice bedazzles with sequins, red crystal bugle beads, and 24k gold lined crystal seed beads.  Limited to an edition of eight, these gorgeous hand beaded and sequined dresses were cut a little bit longer than the original beauty, which was lent by one of Sylvia's loyal friends, so that she could create the pattern.

For more of Sylvia Campbell's treasures, visit her at Snowdance Fashions.