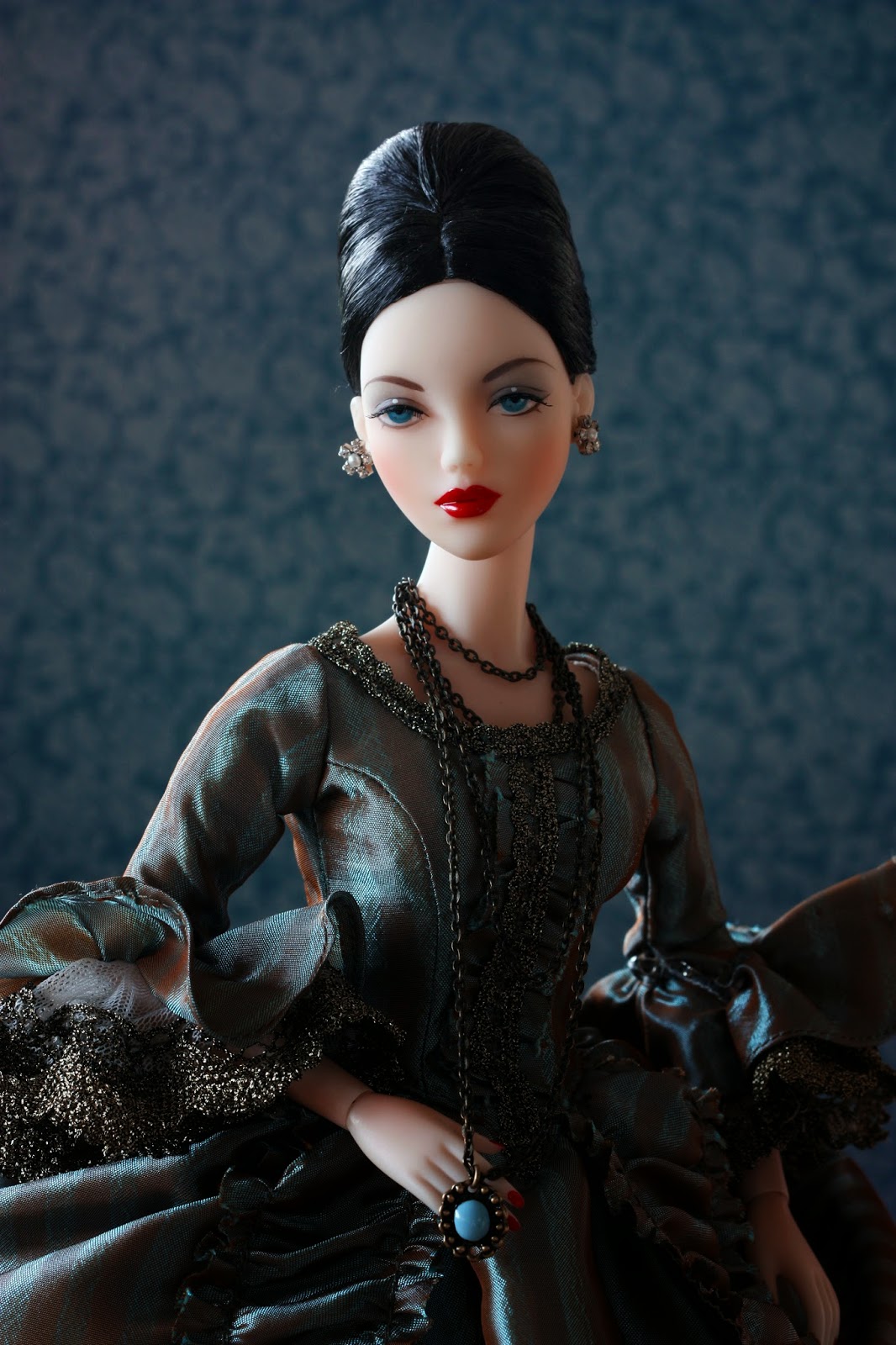 Legendary star Gene Marshall's love affair with Versailles began in 1952 when the beautiful actress visited the palace to support its restoration in a Timothy Alberts' design. Here's the full storyline, as it appeared in Motion Picture magazine:

"Helen of Troy's face may have launched a thousand ships. But a single tear from Gene Marshall's glorious blue eyes helped restore the greatest treasure of France -- The Palace of Versailles.

In 1952 a movement began to restore Versailles. Gene, in France on location for her film PARIS MOON, was invited to an evening gala at Versailles to help raise funds to restore the Sun King's fabulous palace. The dazzling Hall of Mirrors once again played host to France's greatest political, cultural and social leaders. Despite the gentle light from the candelabras, Gene was stricken to see Versailles, the symbol of France's power, glorious history and prestige, slumbering in derelict obscurity. Only ghosts abided here, their music and laughter unheard, the vestiges of royal splendor lying forgotten and faded in its decline. A silver tear traced its way down Gene's flawless cheek at the sight of such sovereign magnificence lying in mournful ruin. A distinguished man, deeply moved by the lovely actresses distress, touched her face with a fingertip. "Upon this tear shall Versailles be rebuilt," promised Charles De Gaulle. The next year the restoration of Versailles began.

Gene's gown is a tribute to the resplendent fashions of Louis XVI's glittering court, Her royal purple satin gown is embroidered with roses and exquisite beadwork. Elbow length gloves, stole, sparkling jewelry, and a silver snood complete the romantic ensemble."

In this late January entry, Dolldom revisits the magic of a night at Versailles with an exclusive portfolio of the iconic purple gown, worn by the original issue model as well as by the new and sophisticated resin version produced by JAMIEshow. To add the proverbial cherry to the top of the sundae, two evocative Tonner Doll Company's Déjà Vu fashions enrich this photo fantasy. 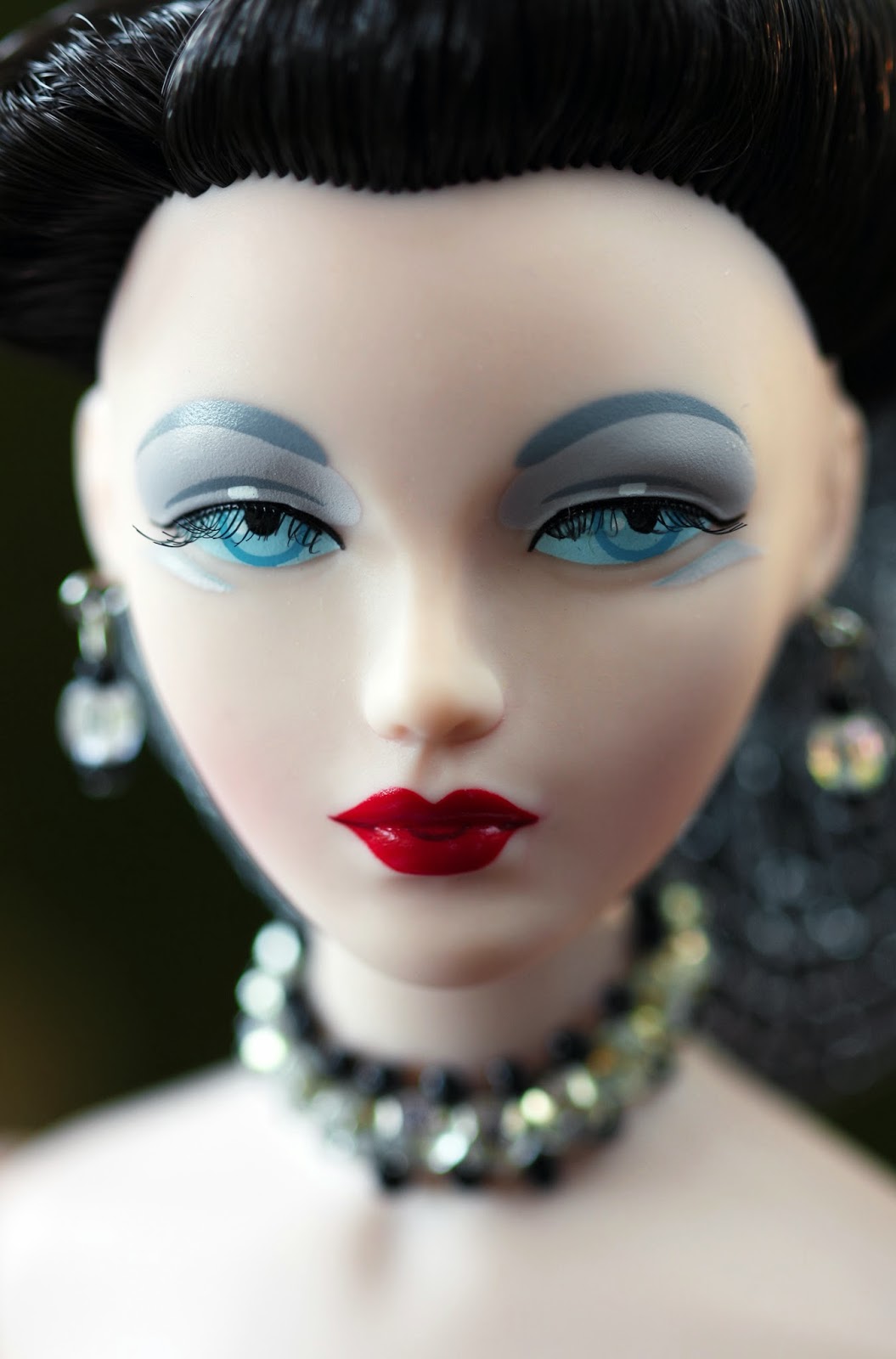 A Night at Versailles - the face of Gene Marshall, circa 1995. 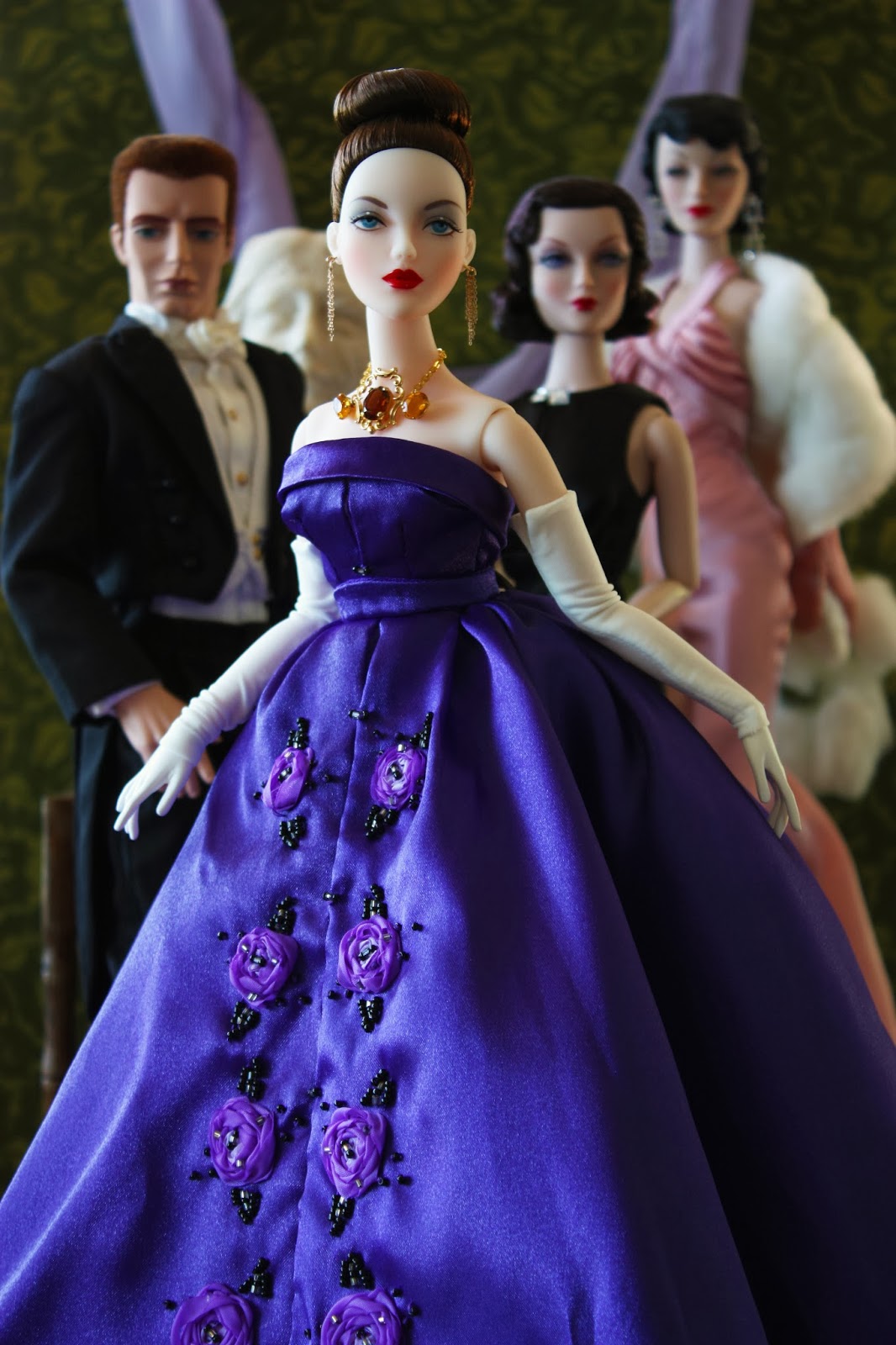 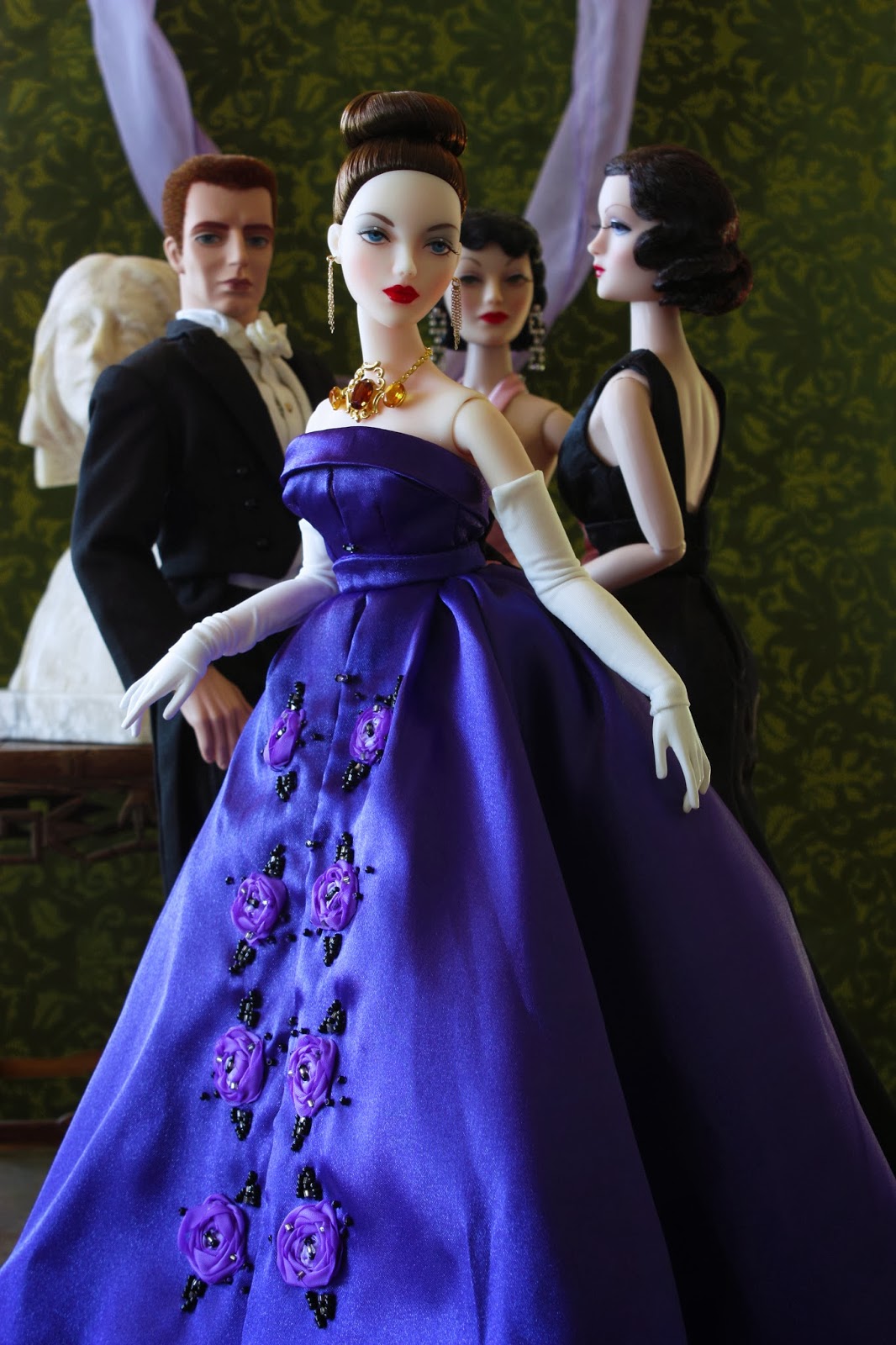 JAMIEshow's Phoenix does the honors this time. 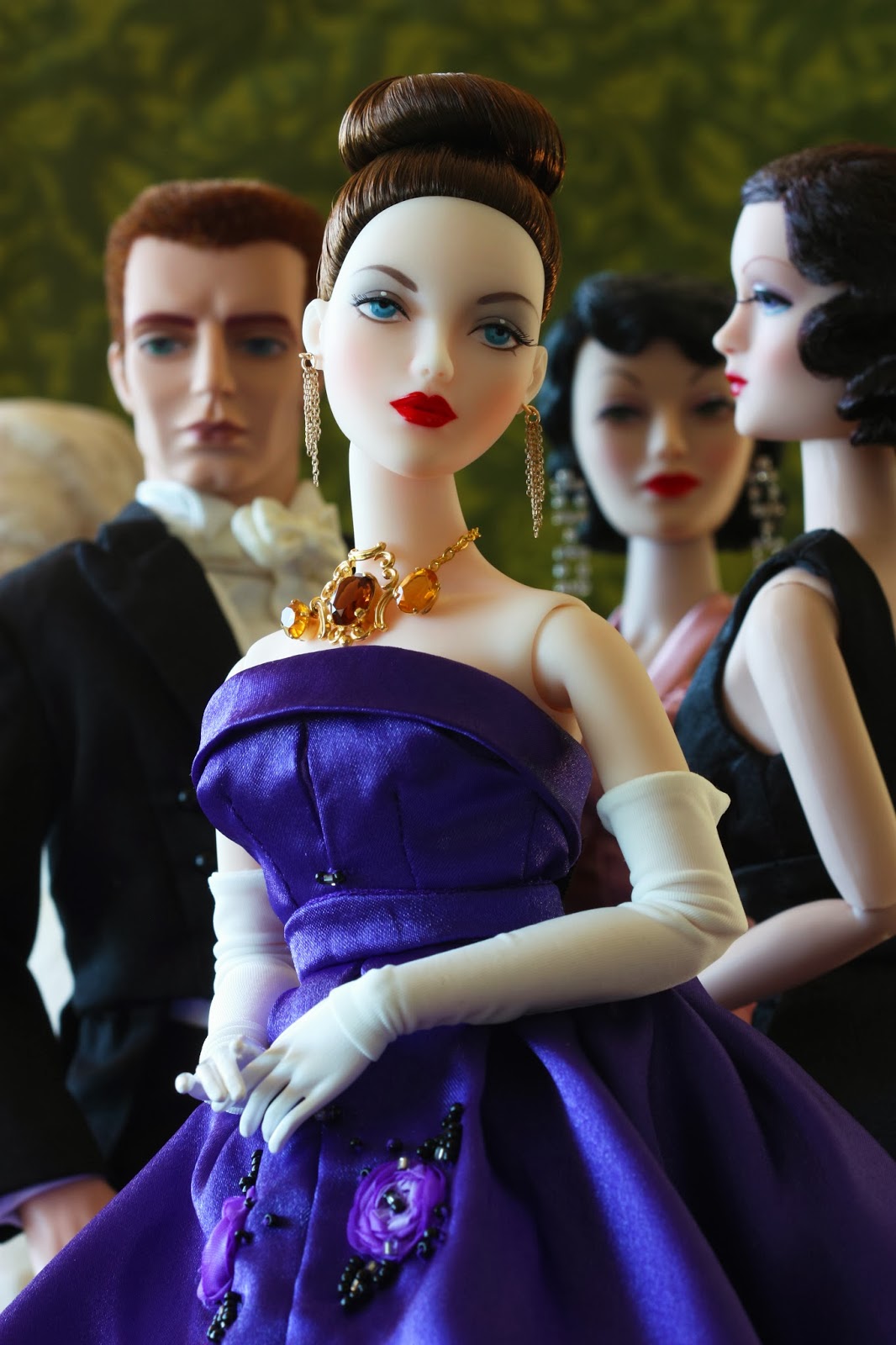 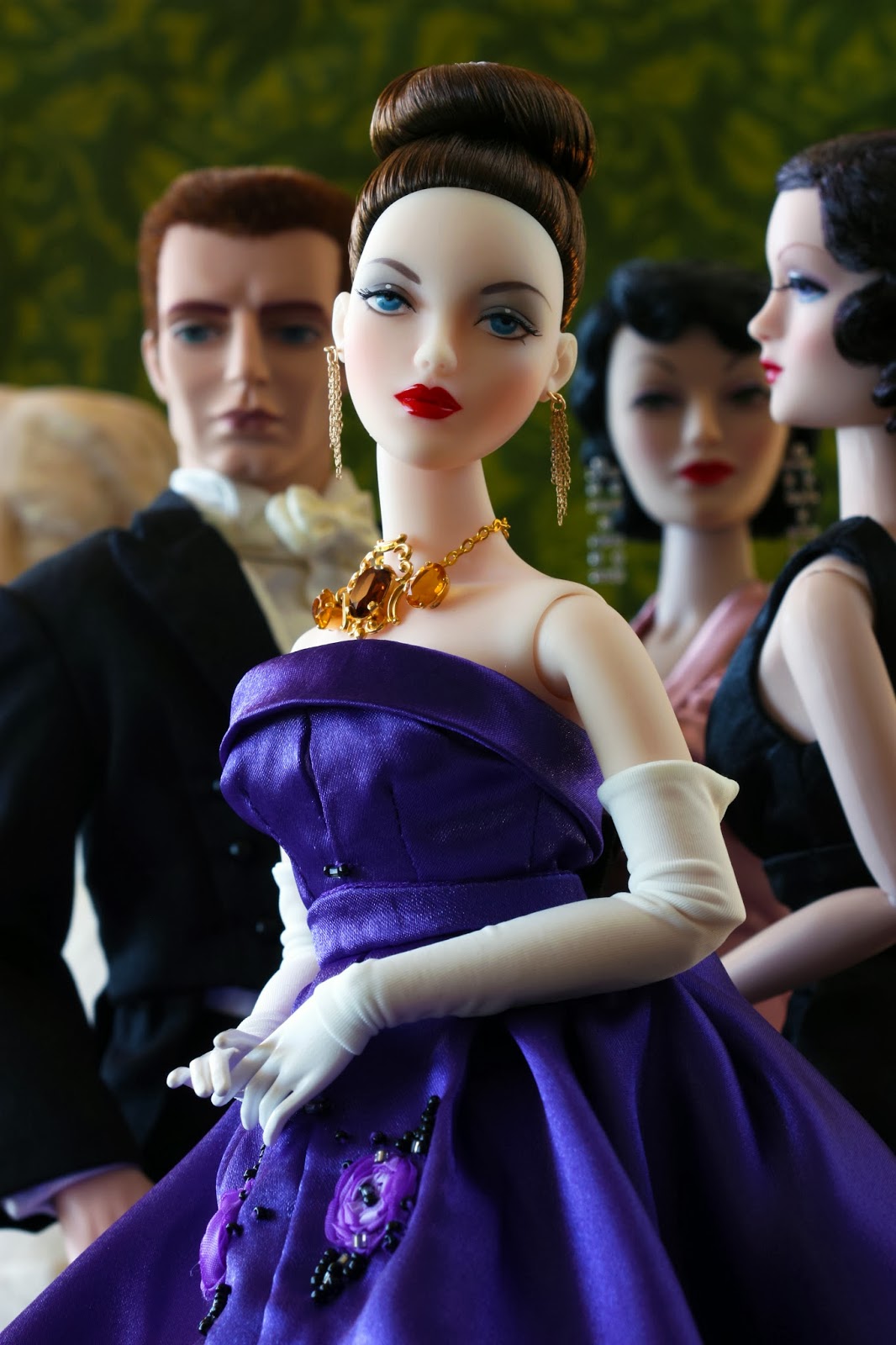 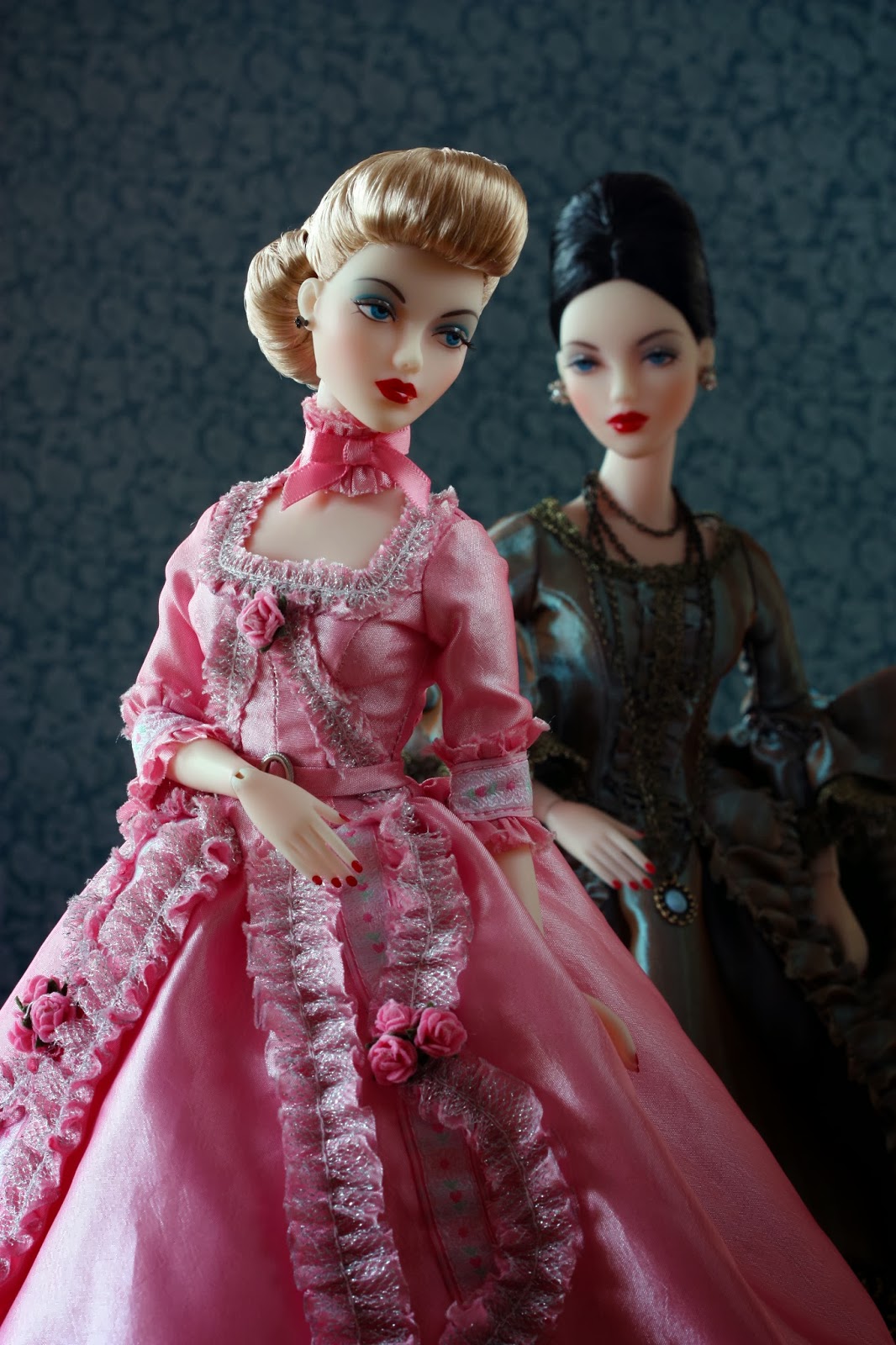 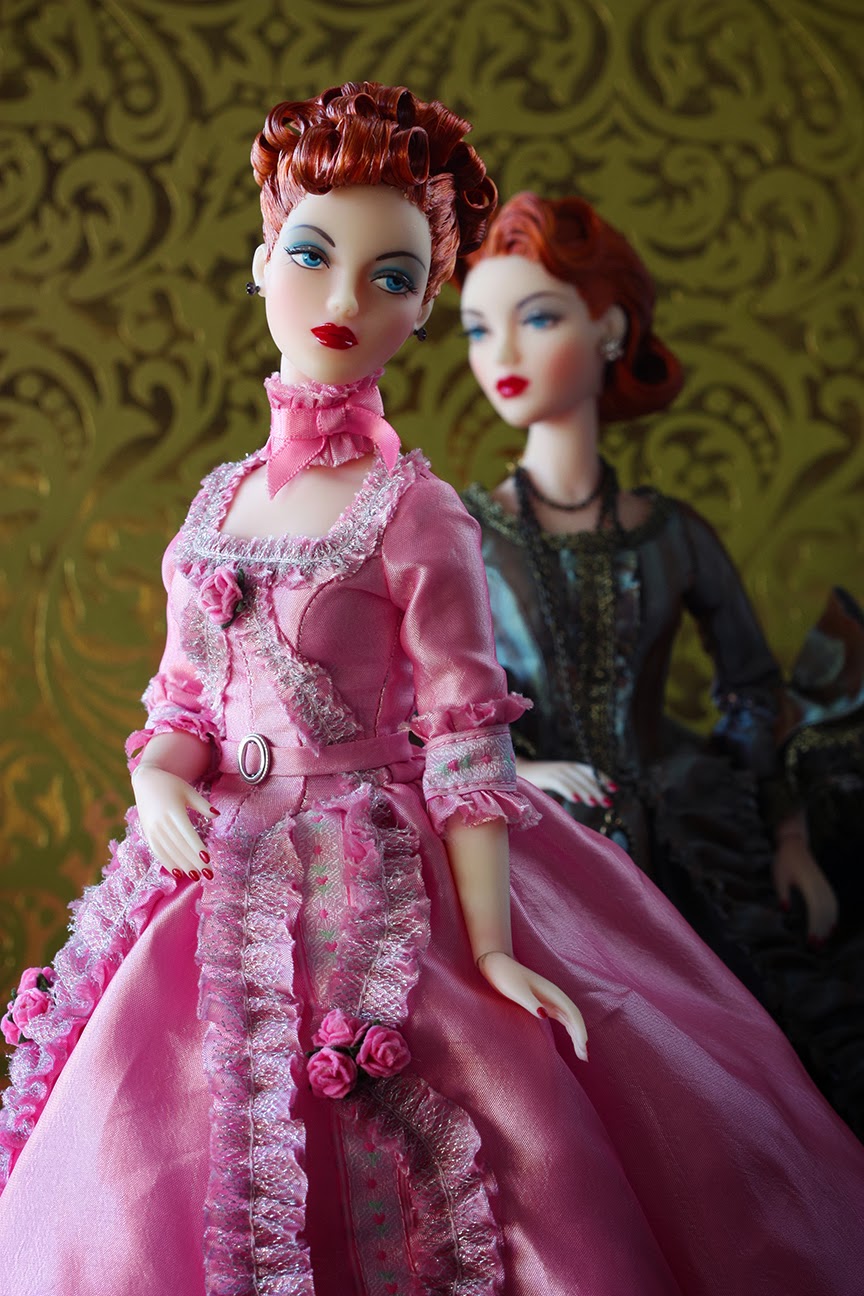 Be it with a blonde or a titian wig by Ilaria Mazonni of Time of Doll, Ma Petite Rose is en enchanting confection. J'adore Gene by JAMIEshow is delicious in pink. 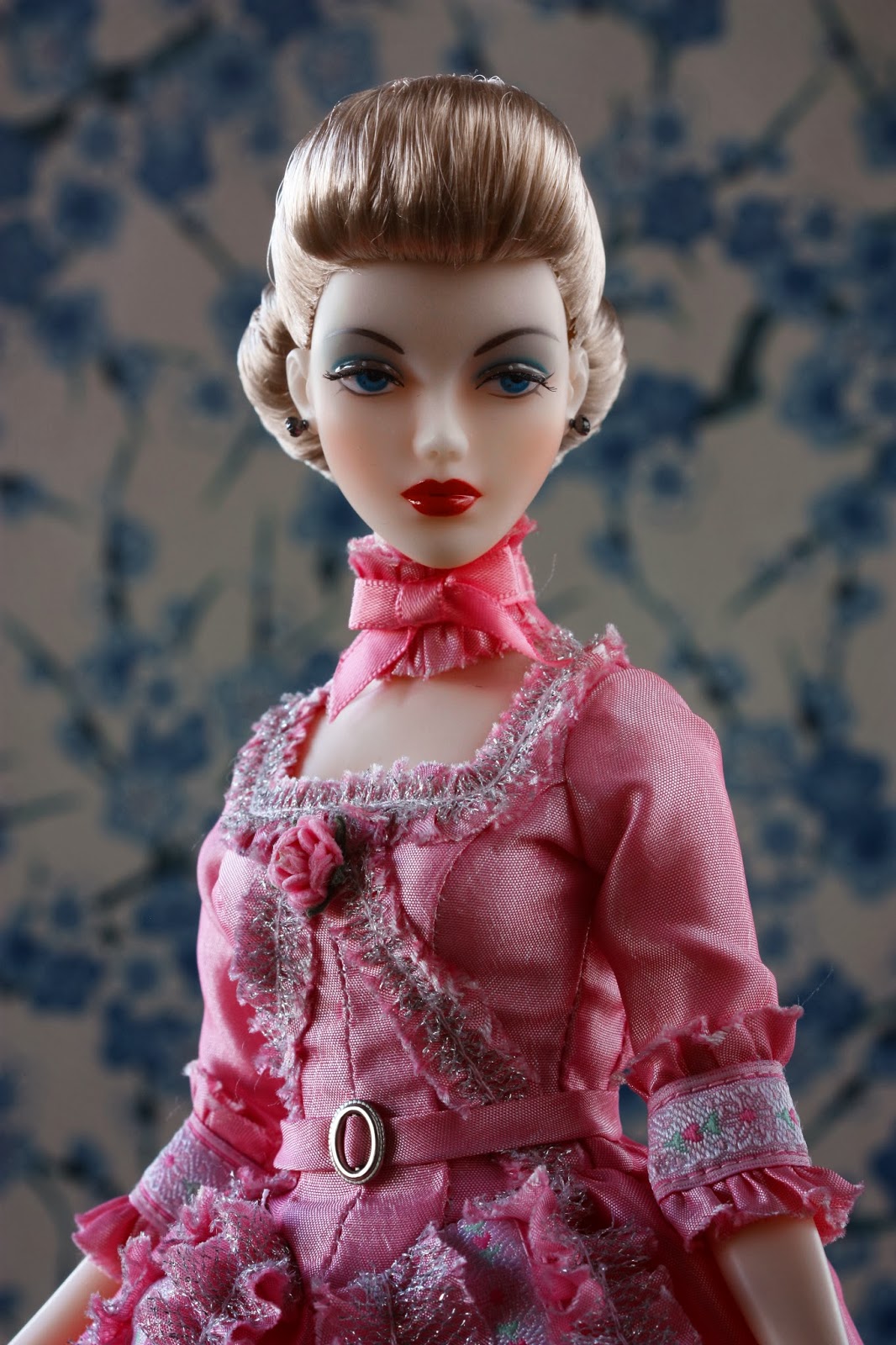 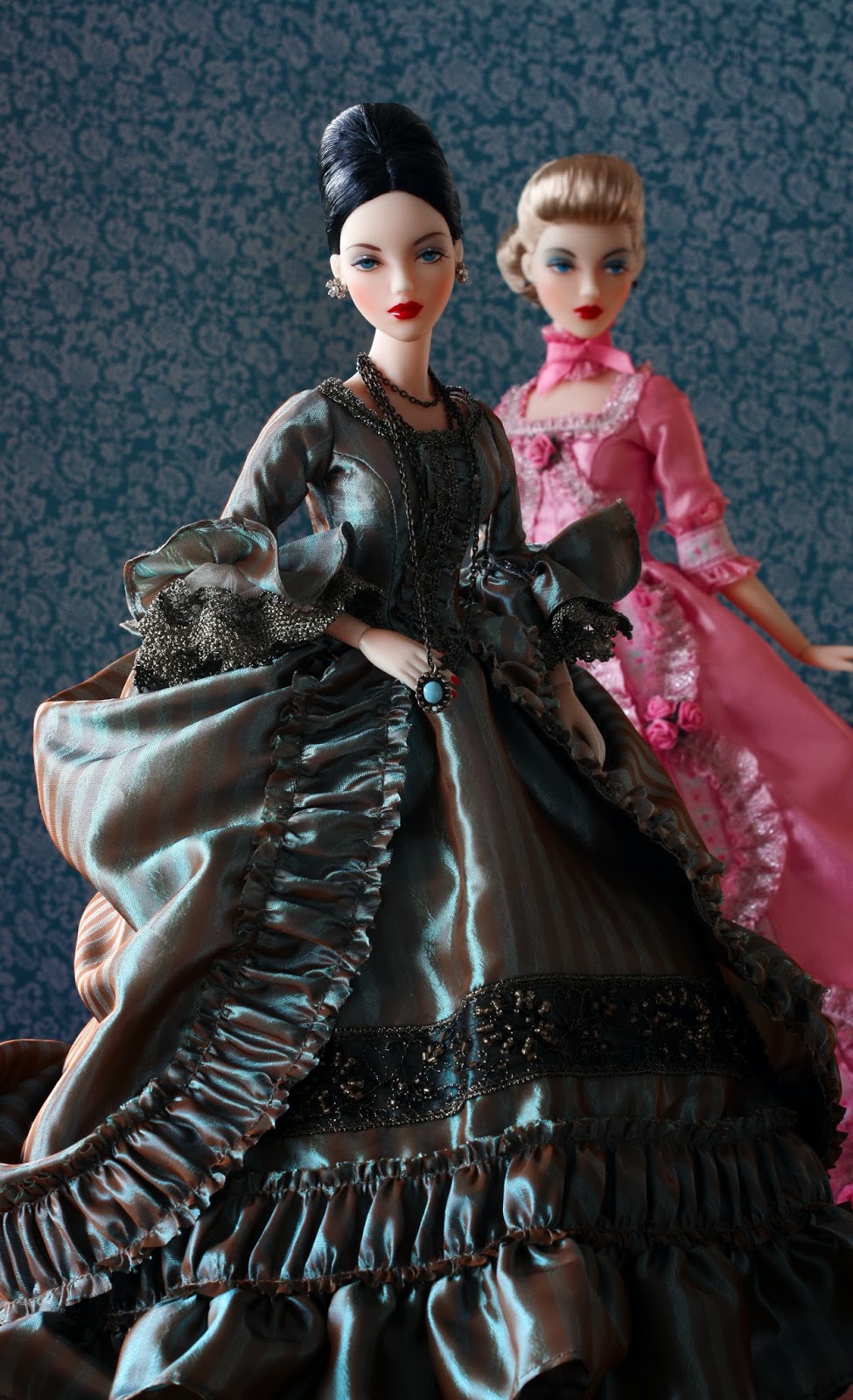 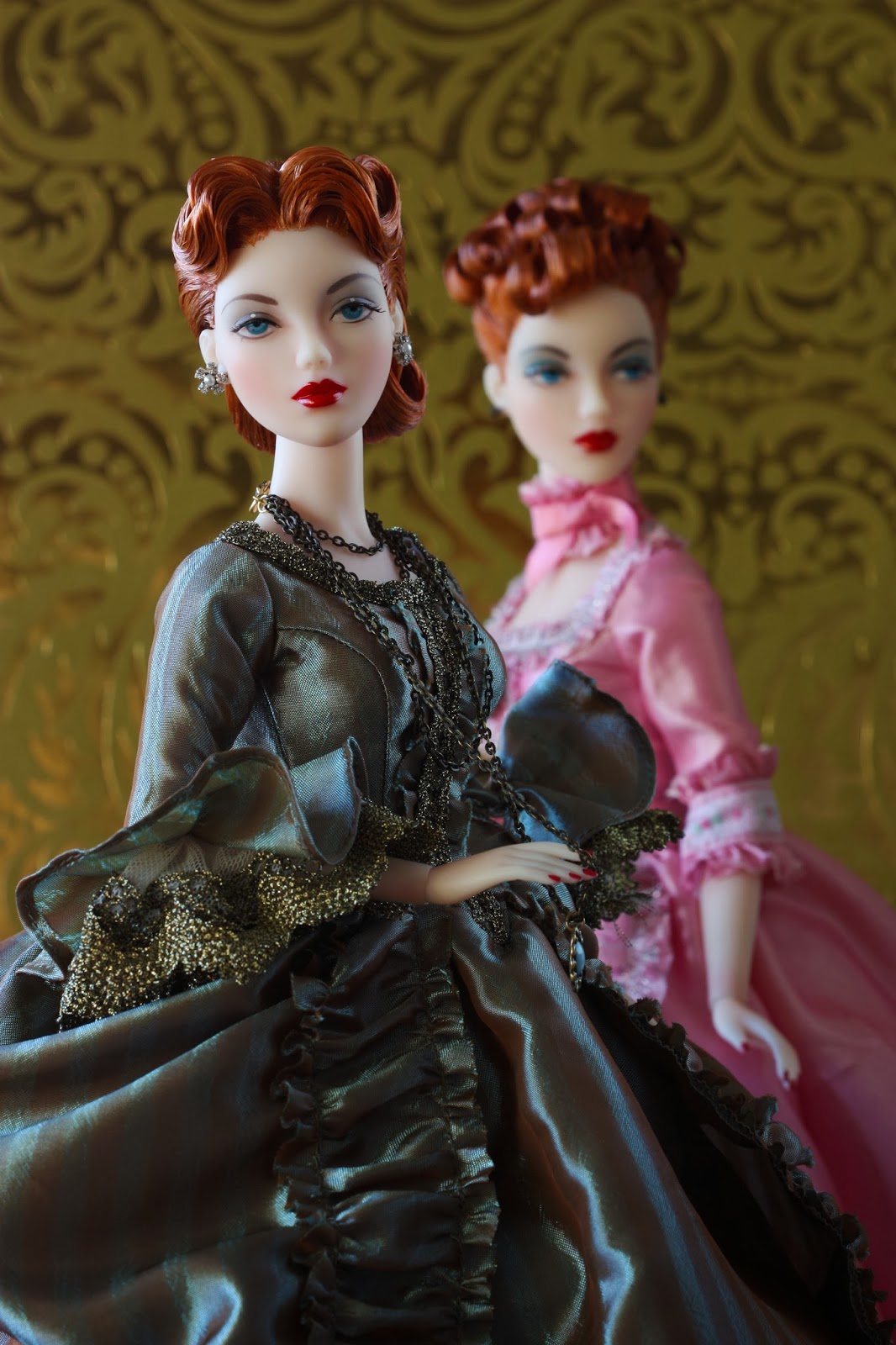 A brown and blue iridescent taffeta frock with gold and sequin beaded trim is sure to impress. Tonner Doll Company's La Vie à Versailles is a veritable period piece.  Wigs by Ilaria Mazonni for Time of Doll.

Note to readers:
The fit of Tonner Doll Company's fashions is not perfect on the Gene Marshall doll as the body dimensions differ. No alterations were done to the fashions in these photos.
Posted by Ernesto at 10:49 AM